Waiting For The Sun

The alarm clock jostled Yvonne and me out of bed at 3:50 AM but I was already awake, not yet adjusted to the nine-hour time difference between San Francisco, California and Siem Reap, Cambodia. We wolfed down bananas and yogurt and headed out the door to meet our guide in a waiting tuk-tuk. By 5:15 we were walking in the dark past shuttered food stalls, up ancient stairs and across a field, finally planting ourselves at the edge of a 200-meter-wide moat. A half hour later, hundreds of people had joined us and the hundred earliest risers who were already there when we arrived. I set up my tripod and waited, struggling to get my camera leveled by flashlight. Newcomers jockeyed for position and we guarded our territory as the light grew slowly, slowly. Less than an hour to sunrise.

Waiting for the sunrise at Angkor Wat in Cambodia is a ritual that no photography enthusiast should miss, despite the fact that due to morning haze, actually seeing it requires some luck. The iconic photo of this site features a sunburst blazing from behind silhouetted towers and palm trees. We intended to capture that elusive image for ourselves.

Angkor Wat was built in the early 12th century at the height of the Khmer Empire. It is the largest religious structure in the world, covering over 400 acres, and one of hundreds of Khmer temples in Cambodia. Angkor Wat is so important to the country’s national pride that it has appeared on various iterations of the Cambodian flag since the 19th century.

The moat where we waited completely surrounds the two-mile long, fifteen-foot high outer wall of the building complex. The entire Angkor Archeological Park, which also includes many other magnificent examples of Khmer architecture, is a UNESCO World Heritage site. Here’s a fun fact: “Khmer” is actually pronounced “Khmy” and rhymes with “sky.” 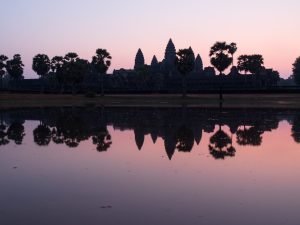 The lightening sky began to show hints of rose and pink against pale blue. It looked as if we were going to have a magnificent sunrise. The Brit next to me with a fancier tripod and a bigger camera showed me a beautiful photo he’d just taken. “What settings did you use?” I asked, and we admired each other’s cameras as I made an adjustment to mine. Ah, now my photo looked as good as his. 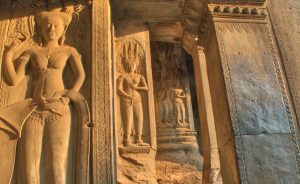 Angkor Wat was originally built as a temple to the Hindu god Vishnu. Carvings of apsara, celestial nymphs, are everywhere. Centuries ago those carvings were painted. For the most part, the bright colors have long since worn away, but there are places where we could see hints of what once was. Temple walls longer than two football fields were carved in detailed bas relief, telling stories from Hindu mythology. 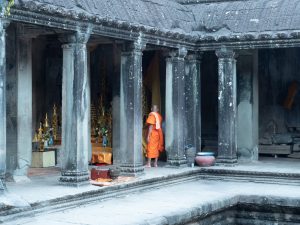 When a later Khmer king converted to Buddhism, Buddhist carvings were added, but nothing was destroyed. Despite many changes of fortune over the centuries, Angkor Wat was never completely abandoned, and monks still maintain Buddhist altars in rooms within the temple. 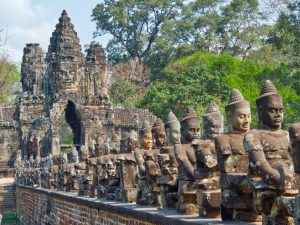 Angkor Wat was only the first of many temples we’d see that day. Each was unique, with its own personality. The awe-inspiring size of Angor Wat was easily matched by the wondrous beauty of the stone faces at the Buddhist temple of Bayon. The causeway leading to the temple’s huge gate is lined with hundreds of divine warriors. 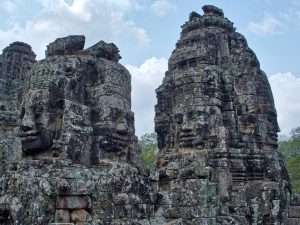 Inside Bayon are dozens of four-sided sandstone towers, each carved with four faces six to eight feet high. Were they portraits of the god-king Jayavarman VII who ordered Bayon’s construction in the late 12th century, or images of the Buddha? No one is certain. 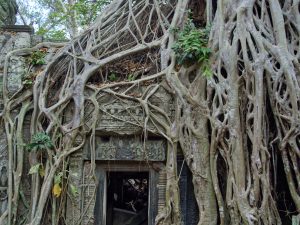 Ta Prohm is the “jungle temple” made famous in Angelina Jolie’s Tomb Raider film. Abandoned for centuries, the late-12th century temple was half-swallowed by the jungle.  Tetrameles trees grow everywhere, their roots splitting the stones from each other and ripping walls apart. At some point the conservation authorities had a decision to make: should they remove the destructive trees to save the structures, or should they maintain the moody and mysterious beauty of the site? 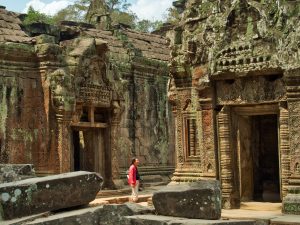 They chose the latter path, adding massive steel supports where necessary to keep the walls from being pushed over by roots a foot thick. But even the areas that were cleared of jungle seemed magical and otherworldly. As I wandered, admiring facades covered with moss and intricately-carved images of praying Buddhas, I felt as if I were exploring a lost city in an Indiana Jones film.

Angkor Wat, 6:15 AM: The gorgeous colors of dawn gave way to a sunless, gray-blue sky. Surya, the Hindu god of the sun, was awake, but he wasn’t going to reveal himself to us until later that morning. I put away my tripod, only slightly disappointed.

We walked to the 900-year-old stone bridge that crosses over the moat and entered the ruins of one of the most magnificent structures I have ever seen.