I first met Britta in the late 1990s, when she was only eight. Her father had died the year before. Her mother, Veronika, had been friends with my wife Yvonne since they’d met in Munich when Yvonne worked there in the mid-1980s. But it was my first time in Germany, and also the first time for our infant son, whom Britta loved to entertain.

Britta’s face looked unmistakably German: round and pretty with rosy cheeks, curly blond hair, and–despite her loss–joyous, blue eyes. Britta spoke virtually no English but she took pleasure with her older brother, Johannes, in teaching me a few words of German—most notably lecker, which means “yummy.” The two kids laughed deliriously whenever I said it. I’m still not sure if they laughed out of delight in having taught me the word or because of the way I said it.

Now Britta, at 31 years old, is a tall, strikingly beautiful version of her childhood self, an ophthalmologist who speaks excellent English. She really, really wanted Yvonne and me to come to her wedding celebration with her new Swiss husband, Patrick. Whether we could come to Germany during the Covid pandemic—and whether the celebration could even take place—was a question until only a few weeks before the date.

Reichenau Island is known as a beautiful little vacation getaway to many Germans, but it’s almost unknown to Americans. Situated in the western corner of the Bodensee (Lake Constance)—Europe’s largest lake—Reichenau is covered with greenhouses, walking paths, and fields of lettuce, flowers and grapes. The lake itself is wonderful for a refreshing swim with a summer water temperature of around 68˚ F. Reichenau Island is where Britta grew up, where her father is buried, and where she wanted to celebrate.

I was excited to see Britta and her family again. But I had some trepidation about attending an event where everyone but me would be speaking German. Yvonne is near-fluent and often serves as my translator. I can speak a little survival German but I knew I could only say lecker and wo ist die toilette so many times before people would wonder about my intellectual prowess.

As it turned out, many of the younger Swiss and German guests spoke English as well as our hosts, and loved talking with me. The older guests, like Patrick’s parents and Britta’s Uncle Walter and Aunt Hildegard, pushed their limited English past the edge in an effort to make me feel welcome. Britta’s brother Johannes, now a handsome 35-year-old who’d driven all the way from Berlin, also spoke great English and was still as bright and curious as I remembered.

A couple of days later, Britta, Veronika, Walter, Hildegard, Yvonne and I (Johannes had to return to Berlin) took a ferry across the lake to Switzerland and began a 25-mile bicycle trip along the water, around to the city of Konstanz, and then back to Reichenau. Somewhere along the way, Britta received a phone call from Patrick.

“Change of plans! We are going to the home of Patrick’s parents for cake.” 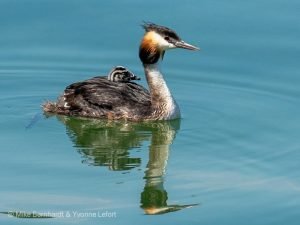 They lived reasonably close by. So we biked up the hills to their beautiful home and the nine of us relaxed with coffee, homemade walnut cake, cookies, beer, ice cream and strawberries, enjoying conversation of which I understood nearly nothing. But when Patrick’s father Hermann found out that I have solar panels and a backup battery on my house—he does also—we had something to talk about in English for quite some time.

Eventually we visitors left and wound our way to dinner at a small Greek restaurant in Konstanz. In Germany, people don’t go to restaurants for food. They go to spend time sharing that food with friends. We ate and relaxed and talked for a few more hours, finally departing into the dark and drizzle for the final, hour-long leg home. The lamp on my bicycle didn’t work so Walter stayed close to make sure I was visible. At the entrance to Reichenau, Walter and Hildegard said their goodbyes and we embraced. Britta left to join her husband in Zurich the next morning, also after many hugs.

Visit most any German village and the local restaurant will have a handmade sign outside by the door that says: Herzlich Willkommen!  It proclaims, A Hearty Welcome! That’s exactly how I felt on Reichenau. I was a part of the family.

We’ve moved on to stay with other friends. My German is still terrible, but I’m understanding more now. I can even respond sometimes. It isn’t that I don’t feel intimidated. I just don’t mind feeling intimidated–it’s part of the adventure.

PrevPreviousI Spoke about Grief and Poetry for NAPT Author’s Corner
NextListen to My Podcast with Charle Rossiter, “Poetry Spoken Here”Next