The Other Side Of Hoi An

The two fighters had just finished a round in the ring. Their handlers wiped them down, squirted cold water down their throats from squeeze bottles, and massaged their backs and necks. Both contestants had a look in their eyes—they were strong, fearless, undeterred by any injuries inflicted during the fight.

And then the next round began, the fighters bobbing and ducking their shaved heads, moving in to attack, twisting around each other. Spectators yelled at the fighters and cheered when one of them jumped into the air, flapped his wings and came down hard on his opponent. They wrapped their plucked, red necks around each other and pushed, trying to take control.

About thirty men, many of them smoking cigarettes that hung out of their mouths like appendages, laughed and argued as they sat around the ring placing bets on their favorite rooster. They looked like extras in an old Jackie Chan movie. It was 10:30 AM on a Tuesday; didn’t these guys have jobs? I wanted to take photos but they said no, probably because cockfighting is illegal in Vietnam.

A half-dozen other roosters sat cock-a-doodle-dooing in bamboo cages near the entrance of the thatched cafe, in which an eight-foot diameter, cement cockfighting arena had been built. At a table nearby, about ten other men gambled over a game of dice. Women brought tea or food and quickly disappeared. This was the men’s domain and they stayed out of the way.

Just an easy, fifteen minute bicycle ride from Hoi An’s beautiful but overly-touristed old town, across two narrow bridges, is the agricultural island of Cam Kim. It’s a place where residents still yell “Hello!”from their porches, and the only tourist-oriented businesses are a few wood-carving shops. A smiling girl, about seven years old and standing between her seated parents on a moving motorbike, yelled “I love you!” as she passed. 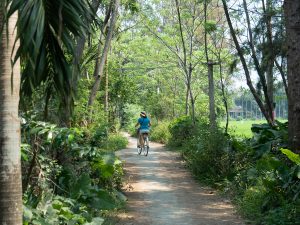 Yvonne and I pedaled our one-speed hotel bicycles off the island-encircling asphalt road onto one of the many cement lanes into the countryside. Lanes became dirt tracks and we followed one to a series of 100-foot long arbors roofed with yellow cucumber blooms and dangling fruit while a handful of cattle grazed in a nearby copse and hundreds of birds sang in the trees above us. 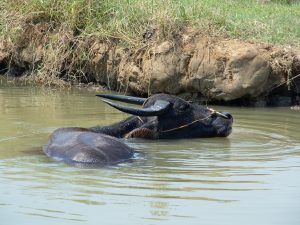 We passed submerged water buffalo and women working in rice fields. In front of a house, a man held a log with his feet as he carved it with a chisel and wooden mallet, stopping to wave as we passed. In a shop, a husband and wife inlaid hand-cut mother-of-pearl into wooden boxes and vases.

We eventually made our way back to Hoi An, crossing the empty Lantern Bridge. That evening, as it is every evening, the bridge was so crowded that it was nearly impassable. But the peacefulness of the day had carried over. 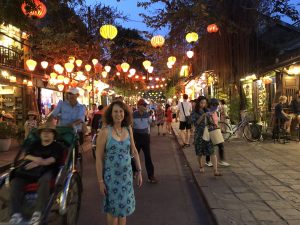 As we relaxed over a riverside dinner, we commented that Hoi An looks more like New Orleans Square in Disneyland than the historic UNESCO World Heritage Site that it is. But despite the kitsch, it has a beautiful soul. After dinner, I bought a paper lantern from an old woman, made a prayer, and launched it into the river.

PrevPreviousWaiting For The Sun
NextOn The Back Of A BikeNext