Seven of us followed Pico up the rock-strewn path for about half a mile until we got to where his pickup truck was parked. We were going to see a moonshine operation near Chacala, in the mountains above Yelapa, Mexico. My head was filled with wild fantasies. I imagined a well-dressed El Chapo-like mobster and armed guards eying us as we entered his jungle stronghold, searching us for weapons or badges with their automatic rifles pointed at our chests. The only reason we were even getting in was because Pico, our driver, knew the moonshiner and had gotten permission to bring us up. 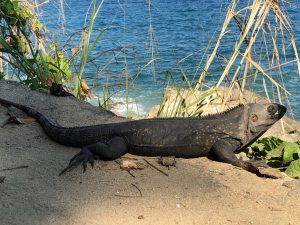 We piled onto wooden plank benches mounted in the back and began the long drive, working our way up the mountain on a rutted, dirt road, swerving to the left or the right to avoid a pothole. I looked for the iguanas that often relax in trees in the region but didn’t see any. I heard the calls of various jungle birds. 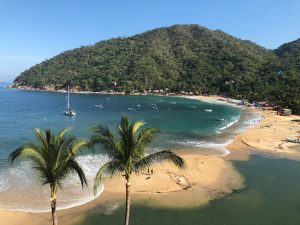 When the trees occasionally cleared, I was rewarded with a view out over the bay to the mountains on its far side covered with a thick carpet of green, the occasional stand of palm trees poking above the jungle canopy. Dozens of species of birds live here; puma and jaguar still prowl the forest.

Eventually the land changed from pure jungle to partial agriculture—cattle, horses, and barbed-wire fences. The heat lifted as we approached Chacala, two thousand feet above the sea.

An hour after we’d set out, the road ended at a paved intersection. We turned right and drove for a mile or so, then right again onto a dirt road that led to a small house. We had arrived. We pulled barbed wire fencing out of the way and entered the back yard.

There were no guards, no cartel leader to freeze us with a piercing stare.

Pablo was a tall, ambling man of about forty, with a black moustache, pointy eyebrows, a chin like Jay Leno, and a slightly flattened nose that seems to be typical for the indigenous people of the region. He wore dirty jeans and a t-shirt, and his tattered shoes had no laces; his big toe stuck out from the side. Pablo was a poor farmer who supplemented his income with raicilla. We were told later that he only put on the shoes for us. Their house was a single room with a kitchen, a bed, a TV, and tall stacks of… tupperware?

Raicilla, like tequila, is a variety of mezcal (fermented and distilled agave) but that’s where the similarity ends. Tequila is always made from steamed or baked blue agave; Pablo makes his raicilla from smoked and roasted yellow agave. He learned from his father, who still makes it at his own house not that far away. Pablo’s wife poured samples for us to try the moment we arrived. It was as colorless as water and I was sure that it was going to be harsh. But it was delicious, with a lighter flavor than tequila and a wonderful smoky quality.

It turns out that a lot of people who know a little Spanish is much worse than one person who knows a lot of Spanish, because as Pablo spoke, sparingly, I received multiple translations from some of the other visitors who tried to interpret his minimalist explanations. And since I speak almost no Spanish, I was at their mercy.

Supposedly one of the samples of raicilla was from the first distilling and the other was second distilling. 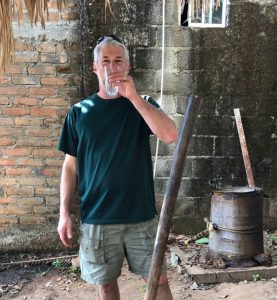 I thought one was much smoother than the other. I went back and forth between them several times and strangely, the more I tasted, the smoother both of them became. Later I had a different sample straight from a bottle and it was smoother still, and also noticably sweeter than the others. Was this a different batch? Aged for a while? I never found out.

Pablo makes raicilla exactly the way his father taught him, and I suspect that his knowledge goes back many more generations.

Allow me to pause for a moment. If you don’t care about how raicilla is made, stop reading right now and pick up again at the last two paragraphs. Otherwise,  your eyes will glaze over and you’ll fall asleep. If you want to get geeky about distilled spirits and have some idea about the process already, read on.

When the agave plant is ready, after about eight years just as the flower is forming, Pablo cuts the leaves away and keeps the thick, pithy trunk of the plant. The unfermented agave tastes sweet and reminded me of sugar cane.

He chops it into melon-sized chunks and throws them into a big hole in the ground where he’s started a fire using dried agave leaves—nothing is wasted. Then he covers the hole so that the agave smokes and roasts for four days. When it’s ready, he removes the roasted chunks and pounds them into pulp with wooden hammers the size of 16-pound sledgehammers.

The pulp is put into large plastic vats, covered with water, and fermented for 10-14 days until it’s dark brown and bubbly. I had a taste of the undistilled product and once was enough—it was sour and very astringent.

The boiler consists of a grave-sized hole in the ground about 18 inches deep, part of which is beneath an old, hollowed-out tree stump. Brick lines the firebox where roots once grew. Not visible in these three photos, but which you can see further down, is a copper bowl inside the tree stump. Pablo poured liquid and shoveled fermented pulp into the tree stump, filling the hole completely. Then he shoveled spent, dried pulp into the oven underneath, mixed in some wood and brush, and started a fire to heat and boil the mash.

Nearby was a big hollowed-out log sitting on its end like a barrel, with an ingenious low-tech distilling system built into it. Pablo lugged this log over and put it on top of the first one. As the fire began to heat his fermented agave, he used more spent pulp, this time wet and sticky like caulk, to seal every part of the system. For those who care about the details, the caption below this photo will provide them.

As the fire heated the fermented pulp and water, the distillate hit the condensing system, dripped onto a hand-carved wooden drainage board, and ran out through the tube made from rolled-and-tied agave leaves. After it’s distilled a second time, it will be ready for consumption.

I thought about the stainless steel or copper distilling paraphernalia used to make whiskey and bourbon, the scientific measuring instruments, the specialized, lab-created yeast strains, all the technology we first-worlders use, to create a product that is arguably no better than what Pablo makes in a hollowed-out tree stump.

Pablo sells his raicilla to his friends and the occasional tourist in whatever container they’ve brought to his house. A few people in our group emptied their plastic water bottles and filled up. I didn’t. But as I write this, I remember that smoky taste and sweet, smooth finish, and I wish I’d smuggled a bottle home.

Many thanks to Sarah Galli for some of the photos. She’s a parasailing American expat in Yelapa who is also a professional photographer. All uncredited photos are by my lovely wife, Yvonne.