On The Back Of A Bike

When we arrived in Ho Chi Minh City (Saigon), we were given this advice on crossing the street in a Vietnamese city: “Hold up your hand as you step into the street to let the cars and bikes know you’re crossing. If that doesn’t work, close your eyes and just keep walking.” 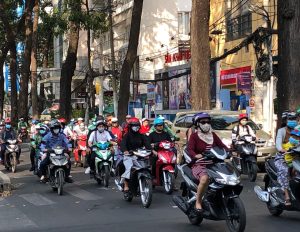 I found that it was a matter of walking with confidence. The motorbikes and taxis can sense fear in a pedestrian and if they smell it on you—if you run, for example—they will come after you, and fast. But if you find your moment of Zen and just step into the river of traffic, you become like a steadily-moving rock and the traffic flows around you. At least, that’s the theory. And it worked pretty well in Saigon. 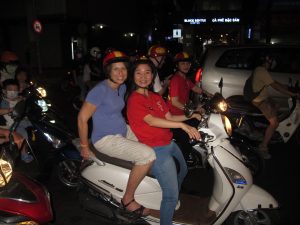 We found that a marvelous way to join the madness was on the back of a motorbike, exploring the amazing street food scene in Saigon. We did it on our only night there, and it was very memorable for all the right reasons. Each of us rode on the back of a bike driven by a university student. They spoke good English, they were safe drivers, and they showed us a good time.
The owner of our company is an American-born chef and he loves to find really local, delicious restaurants for his clients to visit. We rode through the non-tourist districts of Saigon to visit five different locations, each specializing in a particular food. At all of them, our group of about ten people were the only westerners. 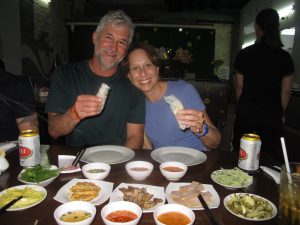 The first place had fresh, assemble-it-yourself spring rolls, and fried Vietnamese pancakes. The real secret was to roll a fried pancake into the spring roll. We got to try making the stretchy, rice flour crepes that are the wrapper for spring rolls. Another restaurant had braziers on the tables and we ate a variety of marinated, grilled meats and vegetables.

Another place only served crab soup, and at a fourth, we wrapped a variety of greens and meats in betel leaves, like a lettuce wrap. While we were there, I also tried a chicken embryo egg—yum!

We finished with dessert. Beer and soft drinks were included at every location and even the biggest eater got as much food as he could stand. I was completely stuffed with deliciousness.
On the back of the bike, I watched the chaotic traffic became a beautiful dance as we wended through intersections and traffic circles. Bikes and cars wove around each other, finding and occupying empty space anywhere they could. No one (except, usually, our drivers) seemed to think twice about driving on the wrong side of the street when turning a corner.
Some foreigners are brave enough/stupid enough to rent their own bikes. In my opinion, this is truly a vocation that should be left to the experts. It takes a special kind of assertiveness and skill to navigate the streets of Saigon at 20 mph. My driver told me that she grew up in a small town and it was months before even she felt confident driving a motorbike in the city. This was us:

In Hanoi, there is a whole new level of danger and insanity. It was a battle, not a dance. Our taxi from the airport nearly ran over a western couple who were following all of the above rules. Their upheld hands didn’t matter; he was determined to squeeze his mid-sized sedan into the motorbike-sized gap between those shocked, angry tourists and the curb. They had to give way or get run over, and our driver knew he had the upper hand.

God help you if the car is German because its owner has to be wealthy and has no interest in being patient with pedestrians or even motorbikes. The one I saw (or perhaps the chauffeur) honked all the way through a vehicle crossing in the Hanoi Night Market, continuing down the street like a screaming, rampaging elephant.
Yesterday morning while we were in a Hanoi taxi, a motorcycle came straight us from the wrong direction on a busy one-way street. He didn’t even see us because he was looking down at his phone as he rode. At the very last moment, he swerved out of the way, and neither he nor our driver seemed surprised.

I’ll almost certainly write another post about Hanoi, but for now I will just say this: one of the best things about staying near historic Hoan Kiem Lake is that on the weekend, the roads are closed to all traffic. Like, really closed, unlike the “pedestrian” night market that was somehow still full of motorbikes.

PrevPreviousThe Other Side Of Hoi An
NextOn the Road Again!Next