Quito In An Afternoon

We didn’t arrive at our hotel until midnight Friday and slept in Saturday morning. Since we were meeting our tour group at 7PM, we only had a few hours to explore. After a late breakfast, we started on the one-mile walk to Quito’s historic district, hoping to find all the circled numbers on a map the concierge had given to Yvonne.

We headed off the main drag and started uphill on smaller streets. When we were in Morocco earlier this year, crossing the street in her cities was a contest with Death himself as we dodged cars who cared nothing for our presence in the crosswalk. Here in Quito, the cars politely honk to warn you that they’re coming. The difference in street-crossing culture is easily seen in these two “walk” signals. Notice how the man in Tangier is running for his life, while the one in Quito has a relaxed lope and wears a stylish hat.

Our first destination was the Bascilica del Voto Nacional, an enormous Gothic church. It was spectacular: The interior is 460 feet long and nearly 100 feet high, with huge towers offering views over the city. Instead of traditional gargoyles, the exterior is decorated with turtles, iguanas, frigate birds, boobies, and other animals, foreshadowing our upcoming adventure in the Galapagos.

It was clear that a single afternoon was not going to be enough time to focus on all the history that Quito’s historic district offers—so many cathedrals and museums, all that information!—especially when we were almost constantly out of breath from walking in the altitude (Quito’s elevation is over 9,300 feet). Better to relax, wander, and see what finds us. 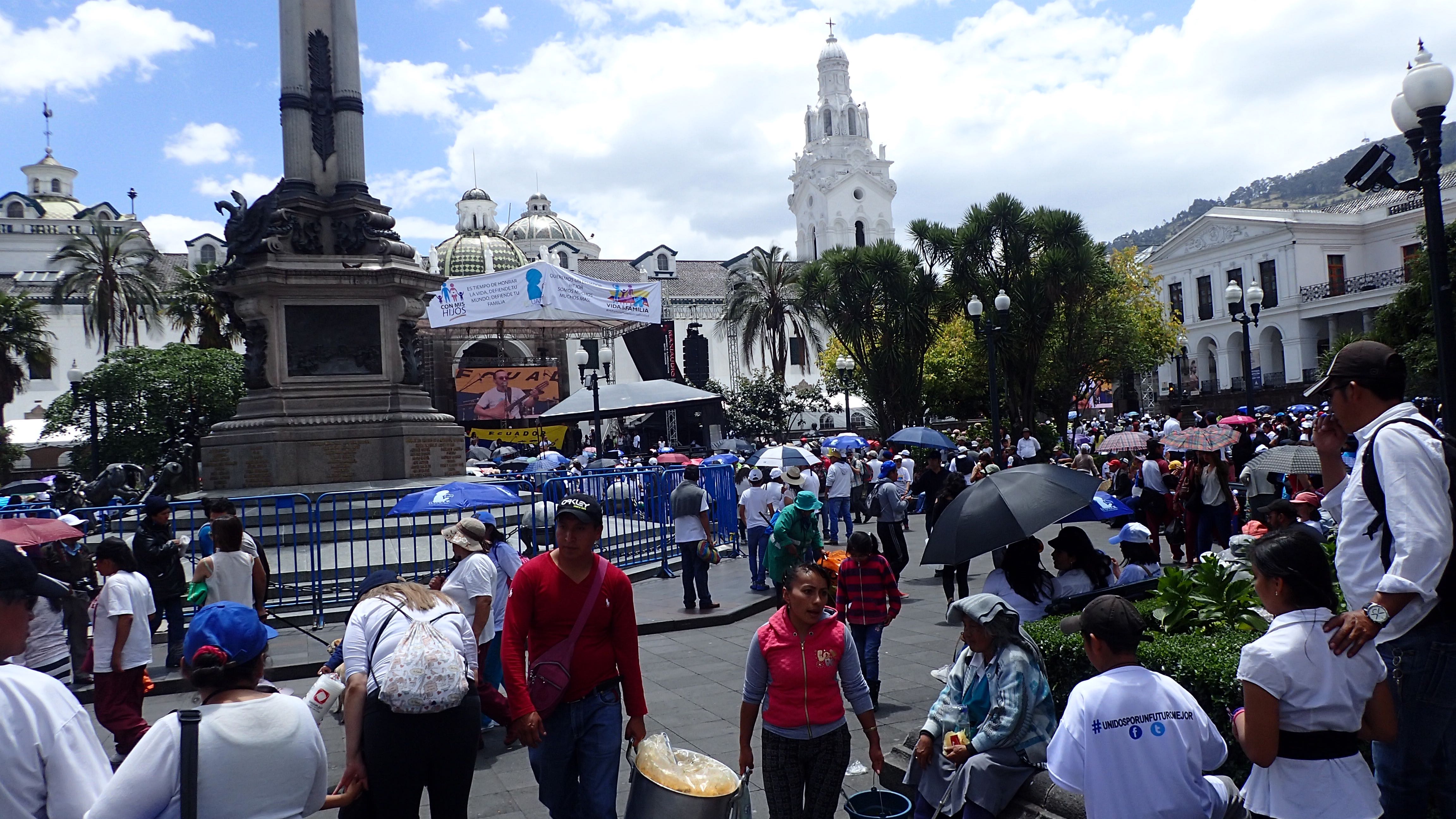 There was a big, family-friendly demonstration going on in the Plaza Grande. A man with a guitar sang beautifully on a stage framed with speaker towers, and three large video screens with his image. A couple of thousand people, mostly women and children, sat in the sun and ate sweets, popsicles, or fruit sold by vendors who snaked through the crowds. Some people sang along. Amongst these Andean and Amazonian people, we felt… tall! It’s not often Yvonne and I get to have that experience.

As we moved on, we passed a woman in Andean garb hawking lottery tickets for solamente un dólarito! (only one little dollar!). Men on street corners sold coca leaves and coca tea to tourists for help with any altitude sickness (coca is legal here).

We wandered down picturesque streets full of galleries, shops, and shoppers until we discovered what for me was the heart of my afternoon in Quito: A small crafts fair and 3 musicians entertaining passersby with wonderful harmonies and the infectious rhythms of bachata or merengue. Children ran among the tables that displayed local wares. This was Life!

Yvonne and I moved with the music, arms around each other; middle-aged Ecuadorian ladies smiled at us approvingly. An older couple danced, the big man’s hips moving as gracefully as his wife’s. He occasionally leaned in to kiss her or whisper something that made her smile.

Still later, we followed new sounds of music to find another fair. This one featured traditional Andean music and dancers, and more tables full of carved wood, leather goods, woven towels and table runners. Each table was hosted by a woman in traditional dress, and displayed a placard naming the pueblo she came from.

One table had a box containing sawdust and huge squirming grubs; they were at least 2 inches long. I wanted to take a photo for this posting but Yvonne wouldn’t let me pollute our camera with the image. You’ll have to settle for this one I found on line. We’ve been told that they are delicious when skewered and grilled. I wouldn’t know—yet.

We climbed a flight of stairs from one street to another and rested at the top, out of breath. My lungs felt ragged, as if I’d just sprinted 200 meters. It was time to head back to our hotel and rest. Our bodies complained about walking back even though it was all downhill, so we grabbed a taxi and paid $3 for the trip.
While we waited at a traffic light in the taxi, a young man walked down the street holding a rack of dresses for sale on his left arm. The right hand was raised high, gripping the leg of a mannequin wearing one of the dresses.

We walked from our hotel to early dinner at a wonderful restaurant serving Ecuadorian food. We tasted small portions of delicious roasted heart of palm, three kinds of ceviche, plantain fritters, and more. What made it special was the wonderful, friendly service from our waiter. It probably helped that at 5:30 PM we were the first diners of the evening, but still, it was fantastic. As the sun set, we walked back to the hotel for our tour orientation. The neighborhood with its many restaurants, bars and clubs was just beginning to come alive, but we would be going to bed early; the Galapagos Islands await, and we depart at 6 AM.

PrevPreviousA Tourist In My Own Back Yard
NextAboard The Xavier IIINext