Aboard The Xavier III

Twelve of us sat in the salon of the boat, the Xavier III, with our Galapageño guide, Fabian. We went around the circle—Germans, Americans, Brits and Australians—introducing ourselves and telling him what we most hoped to see: Tortoises, iguanas, boobies, penguins, flamingos. Fabian told us that if we smiled a lot, we might see them all. Wait—penguins and flamingos? I didn’t know you could see those in the Galapagos Islands! We must have been doing some good smiling because we saw everything the group hoped for, and more. 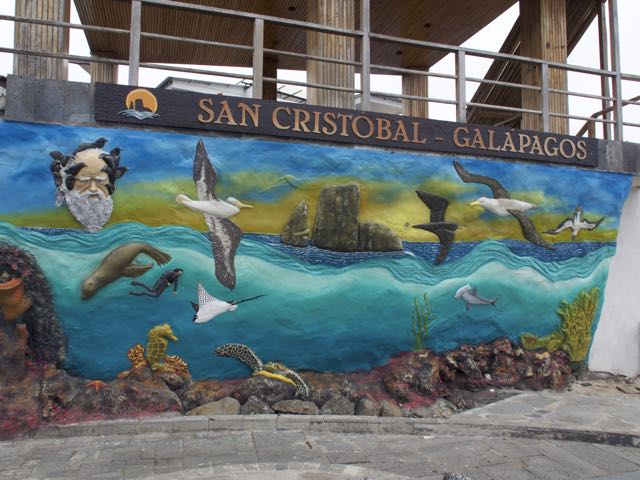 For the next 8 days, we would be living on this boat as we visited different islands, each with its own geology, ecology, and endemic wildlife. Almost every day included two hikes and two snorkeling opportunities. There was very little down time between our 7AM breakfasts and our 7PM dinners; sometimes we craved an afternoon to just relax on the deck and read. But those cravings didn’t last long.
The Galapagos National Park includes the entire chain of 21 islands and extends out 40 nautical miles into the surrounding Pacific. No fishing is allowed (except in a few places, for local fishermen only), and all tourist vessels need a permit and have to follow their park-approved itinerary. You can’t even set foot on most of the islands without a park guide.

One of the main threads that ran through our adventure was that none of the animals were afraid of people. The park requires that visitors stay 6 feet away from the animals, but sometimes the animals literally walked right up to us. Birds courted with no concern for our presence, and we had to walk around marine iguanas or sea lions who sunned themselves on the trails. The photographic opportunities were incredible, as you’ll see in the coming days.

Right after the introductions and orientation, we went out for a walk on Isla Lobos (Sea Lion Island). We boarded zodiacs which dropped us on the boulders of crumbling lava rock that lined the shore. We followed a clearly-marked trail and saw dozens of blue-footed boobies. Adults nested and courted, babies squawked, and all of them ignored us. 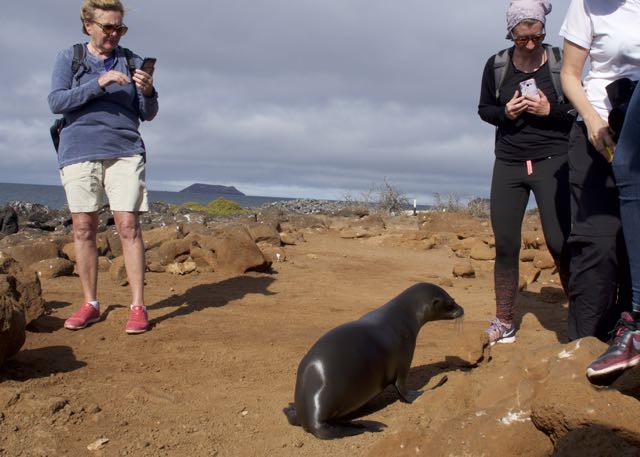 Everywhere, there were sea lions. Babies wandered around, as curious about us as we were about them. Their mothers and the other older sea lions relaxed and warmed themselves on the lava rock. If a young one got hungry, it would bleat like a goat and wander around looking for its mother. Reunited, mom would roll over onto her side and the pup would nurse from one of her four nipples. 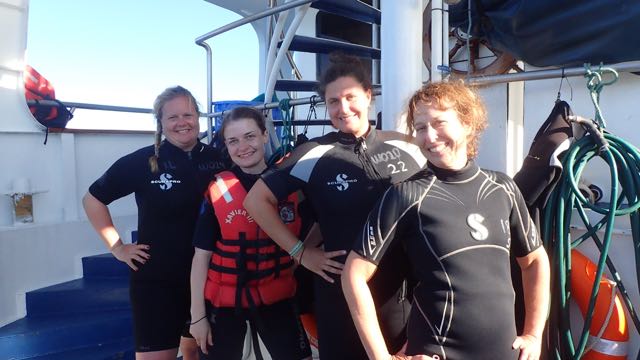 We had our first snorkel excursion as soon as we returned to the ship from our walk. We put on our shorty wet suits, rode the zodiacs to our starting point, and jumped in. I let out a scream as the 68º F water pierced through my suit like a hundred arrows, but after a minute, the cold became manageable.

I was amazed at the variety of sea life there. The nutrient-rich water supports rays, reef sharks, and tons of beautiful fish. In fact, I saw a lot of the same fish that I’ve seen in Hawaii. It turns out that the circulating Pacific currents carry fish eggs between the two places.

But what made the snorkeling special at Isla Lobos were the sea lions themselves. There were some adults in the water at our entry point. They seemed friendly enough, but our guide was concerned about the males getting aggressive with each other and told us to move away, quickly; they can weigh over 500 lbs. Along the shore and around the bend, three younger sea lions appeared right in the middle of our group. They played with us the entire time, constantly nipping at our fins, swimming into our faces and chasing us around.

About 30 minutes was all anyone could take as our core temperatures dropped and the shivering began. Morning snorkeling was never a question for me, but I screamed every time I jumped in. There were hot showers and tea back on board, and lunch always started with a hot soup. Every afternoon, I had to decide whether or not I was willing to get into the cold water again. But I always decided “yes” and never regretted it.

We traveled between islands at night if the journey was going to be more than a couple of hours. One night, I had a nightmare: I was driving in my car with my son in the passenger seat. My body started jerking around of its own accord and I couldn’t control it. My son was telling me to stop the car because driving wasn’t safe with my convulsions. I woke up terrified from the nightmare, and found myself being thrown around in my bunk as the boat bucked on the ocean swells like a rodeo bull.

But most nights, the boat rocked me gently to sleep.