As I write, I am on the train to Casablanca, where we will spend the next week. The rules around the private car in which Yvonne will be traveling prohibit me from joining her. So I am spending the hour-long ride writing. I bought a $7 first-class ticket and this cabin is as nice as anything you’d find in the U.S.

This morning I went back to the kings’ mausoleum to get a couple of better photos. One of the great things about this trip is that I have so much time and flexibility. I’ve now been there 3 times! It is an extraordinarily beautiful place.

Anyway, as I exited the train and walked on the platform toward the exit, I passed a room with shoes sitting outside- a small mosque for people to pray, since the devout are called to do so 5 times per day. Islam is woven into the fabric of life here. But we’ve been told that it’s for each individual to decide how or if they want to practice it; there is a lot of tolerance in both directions.

Yesterday was our last day in Rabat. Yvonne worked, so I spent the day on my own. I wandered the medina looking around at shops, until a man came up to me and started up a conversation. He asked me if I knew what street I was on, which I did: Rue des Consuls. He asked me if I knew why it was called that, which I also did: Because at one time there were foreign consulates on that street, before Morocco became an unwilling French protectorate.
He then offered to show me the remains of the French Consulate. This was new- I didn’t know anything still existed of the consulates because the books don’t tell you that, and for good reason. I declined his offer because I knew he would expect me to pay, and he replied, “No, you don’t have to pay me. I’ll just show it to you and then I’ll go.” Right.

We walked and he began giving me a full tour. He took me into places I didn’t know existed, and in any case would never have ventured into on my own: Crumbling courtyards populated by craftsmen dyeing and cutting tanned leather, making leather cushions, making shoes, weaving, etc. We passed a bakery where they make the ubiquitous Moroccan bread rolls. I soon realized that I was now in his debt and would have to pay him. But I decided to surrender to the situation because the tour was so interesting.

He took me up dangerous-looking stairs in a back corner, to the 2nd floor  to see a man who made belts. There was a belt I really liked. My guide Aziz told me it was 700 Dh though I could clearly see the price tag marked 500 Dh. The quality and artistry was amazing but I wasn’t ready to spend that kind of money on a belt.  We then went up to the roof for a view over the medina and the city beyond. I have to admit I was worried about whether he could be trusted not to rob me when we were out of public view, but my worries were unfounded.
We did eventually get to the consulate, which was now a ruin but an interesting part of history. The French abandoned it in 1940 for a new one they’d built in the Ville Nouvelle (new town) just outside the walls of the medina.

After that, he took me through other less-touristed parts of the medina, past 2 working mosques built in the 14th century, and finally to an incredibly gorgeous riad (a mansion converted into an inn).

And there, the bill came due. He wanted 400 Dh ($40). I knew this was ridiculous, and we finally settled on 150 Dh. It’s a lot of money for him, but it was totally worth it for me to pay $15 US for a 1 hour tour of the “secret” parts of the medina.
After we parted, I attempted to find the belt man again so that I could talk to him about the price. I walked up and down the street 4 or 5 times, to no avail. Though I knew the general area, I simply could not find him again. Eventually I gave up and went back to have another look at the Kasbah.

Wandering the kasbah now, I met a woman standing outside of her home. We spoke for a few minutes as she suffered my broken French, and she eventually invited me in for tea. She had a gorgeous view of the river outside, I met her baby son, and we chatted over mint tea for over an hour. I learned how to make harira as she prepared the garbanzo beans. It turned out that she houses tourists overnight in an extra room. And when I got up to leave, she asked me to “give her something for her hospitality, and for her baby.” This was disappointing; I thought invitation was just simple kindness! Again I negotiated an amount. But, for an hour I had the opportunity to visit with someone in her home and see how she lives. For $5 it was worth it! 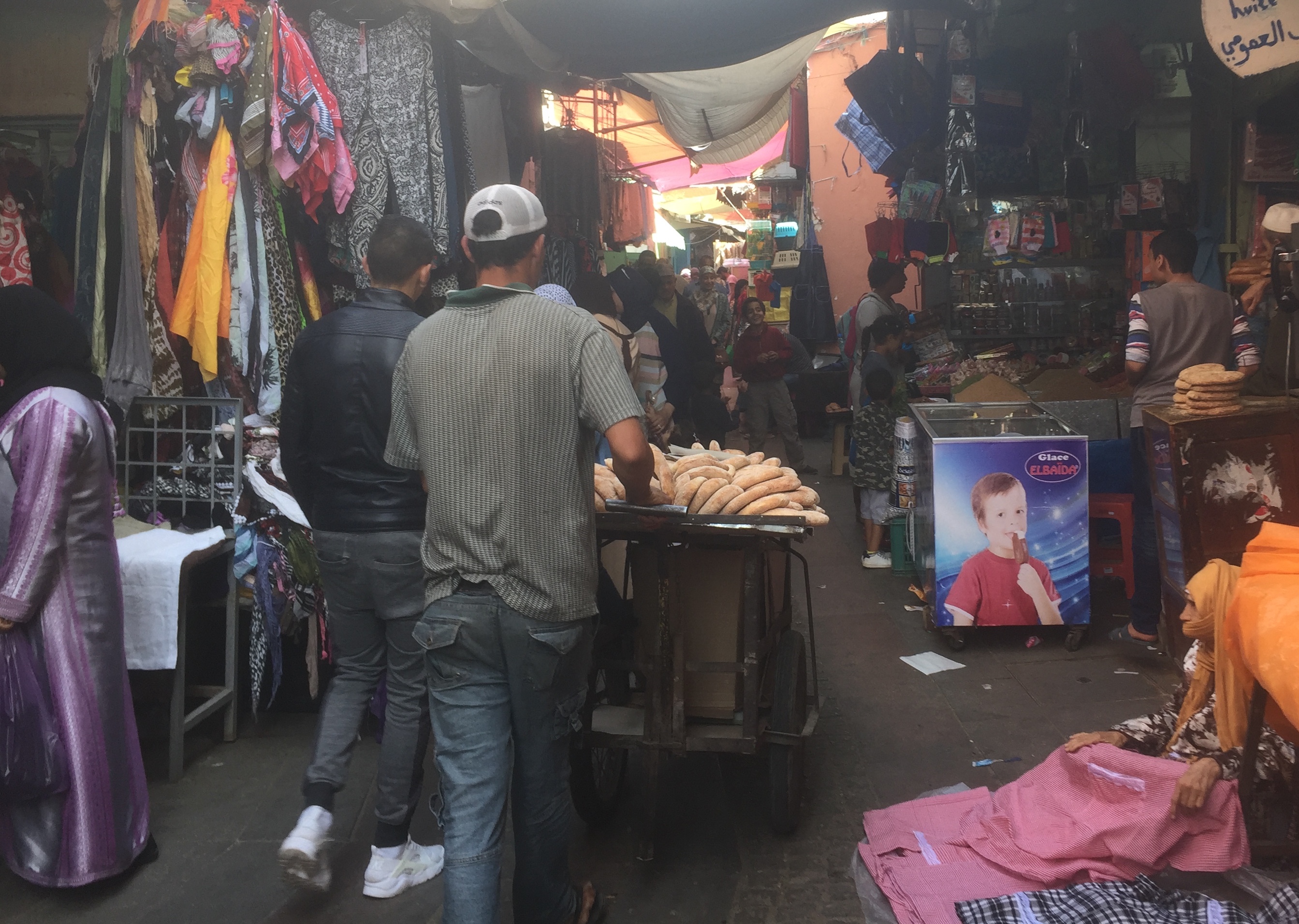 Heading back though the medina again so I could return to my hotel, I was following this man and his cart full of loaves of bread. And then the most wonderful thing happened that only a tourist can appreciate: One of the breads fell off the front into the filthy street. A woman picked it up and put it back on the cart. But wait, there’s more! And although I understand no Arabic, I understood exactly what was said. So, another woman sees what has happened. She chides the first woman for being so oblivious to sanitation that she would put the bread back after it had fallen in the street. As she says this, she picks it up off the cart, brushes it off with her hand and then… puts it back on the cart and the man continues on his way.

On this final morning in Rabat, I went back to make one last attempt to find the belt-maker. I went into one courtyard and accosted a man who made leather binders. I spent several minutes trying to make myself understood to a man who mostly spoke Arabic and only a little French. “Savez-vous l’homme qui fait les ceintures? Il travail dans la place comme ici” is what I said. And there was a lot of gesturing and English thrown in. Finally,  a breakthrough! He knew the man. And since we both knew I would never understand his directions, he took me there!

It was in a place that I did not remember visiting. But sure enough, this was the shop. It turned out that the belt maker was a good friend of his. And so, I bought the belt. The price was not negotiable, but he told me that it took him a week to make it. Try getting that kind of craftsmanship in the U.S. for $50.

And so I finish today’s blog in my room on the 25th floor of a magnificent hotel in Casablanca. This is a huge city of 4 million people, crowded and somewhat polluted. But there are plenty of things to do, including dinner at Rick’s Cafe in the next few days.