We’ve been in Rabat for 2 days now, still adjusting to the 8-hour time difference. Yesterday, we had a pleasant all-day walking adventure.

One thing I’ve been struck by is the contrasts in the ways women dress. One might see a woman in a kaftan and hijab, walking by another woman in torn jeans and long, flowing hair. Many women wear a hijab with western clothes. And we see them socializing together, not separately. I find myself wondering if there is a deeper cultural significance than just how strictly they practice Islam. Or maybe I just have preconceptions to let go of. Yvonne talks about culture being like an iceberg: What is visible is a very small part of it.
Speaking of culture, we read on travel forums and in guide books to be careful about showing affection for each other. They said that that the cities are more modern, but that women and men don’t touch in public. As it turns out, this doesn’t seem to be the case at all. We’ve seen lots of couples holding hands or arm in arm as they walk, and even a few smooching at the beach when they thought no one was looking.
We walked 6 miles through Rabat, from our hotel in the central part of the city, past the king’s palace and a huge mosque, to the medina (old walled city), to the beach, to the Oudaïas Kasbah, back through the medina and then off to dinner before taking a taxi back to our hotel.
In front of the mosque (which we as non-Muslims can’t enter), vendors sat on the ground demonstrating vegetable shredders (because every wife loves receiving gifts like that); a single potion to cure headaches, colds and heart conditions; and some kind of oil or soap, accompanied by photos of whales. All in Arabic. Lots of yelling. Very entertaining. Hundreds of men of every social class surrounded them, watching the sales pitches. No photos, it didn’t seem right.
The souks (markets) in the Rabat medina are relatively calm, we’re told, compared to the ones in Marrakesh and Fez. So it was a good intro for us. Many vendors catered to locals, not tourists, and didn’t pay us any attention. One spice vendor showed me his spices and politely asked me if I would buy a little bit of a mix for chicken. I politely declined and that was that. We came back through a different area hours later and discovered the tourist section, but even there they were not aggressive.
When we got tired, we stopped for fresh fruit juice. A couple of 19-year-old girls were there eating fruit with yogurt, and Yvonne chatted them up. They only spoke a little French, which surprised me, and even less English. They were pretty, friendly, and talked about the cute boys they liked. Just like many 19-year-old girls anywhere. 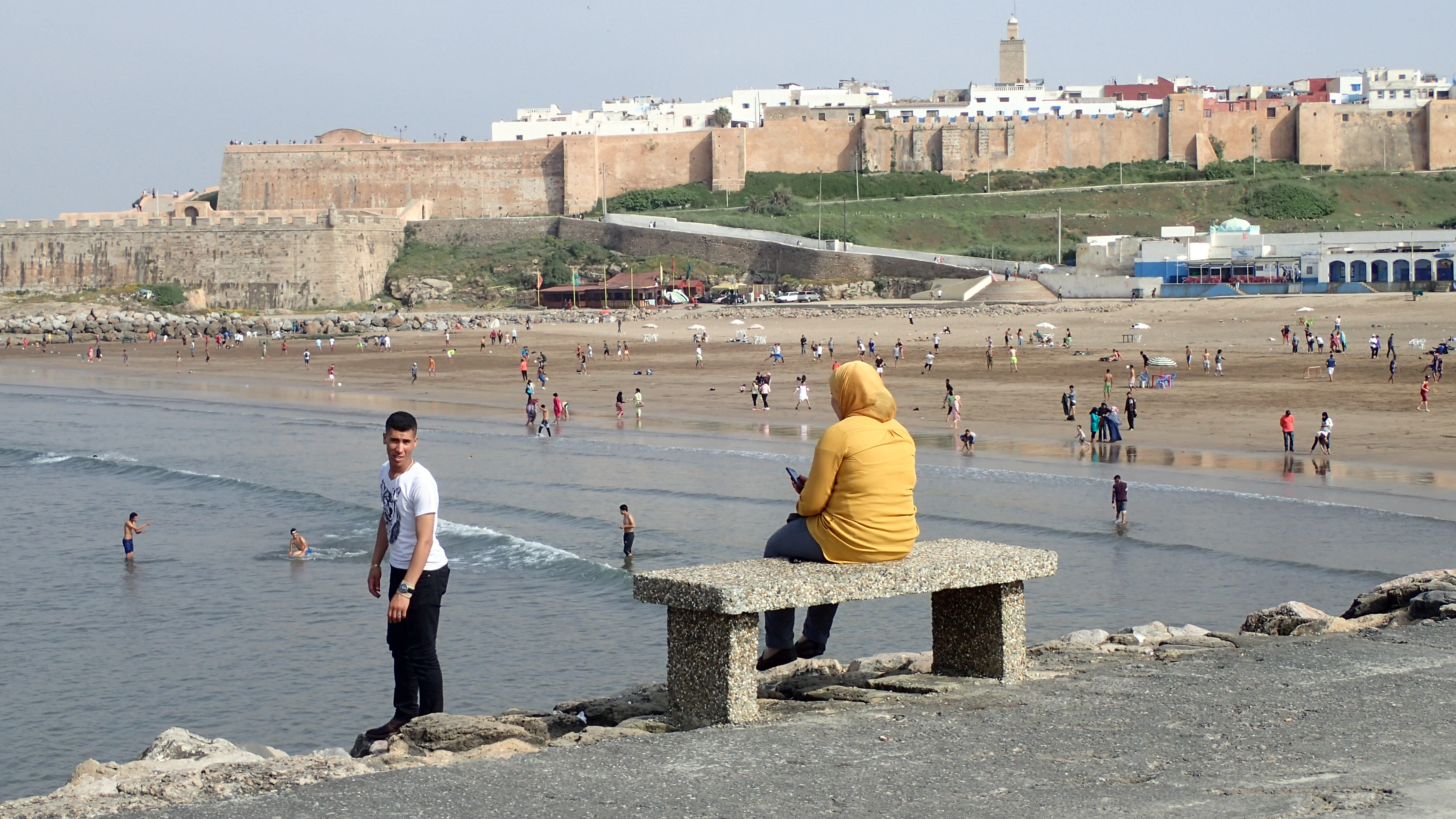 Exiting the ocean side of the medina, we walked to the beach where we met a Spanish man who hopes to become a diplomat. He spotted us as Americans immediately (apparently my black water bottle was the giveaway, along with my sneakers and shirt). After that, up to the Kasbah.
The Kasbah Oudaïas is huge fort built in the 13th century. 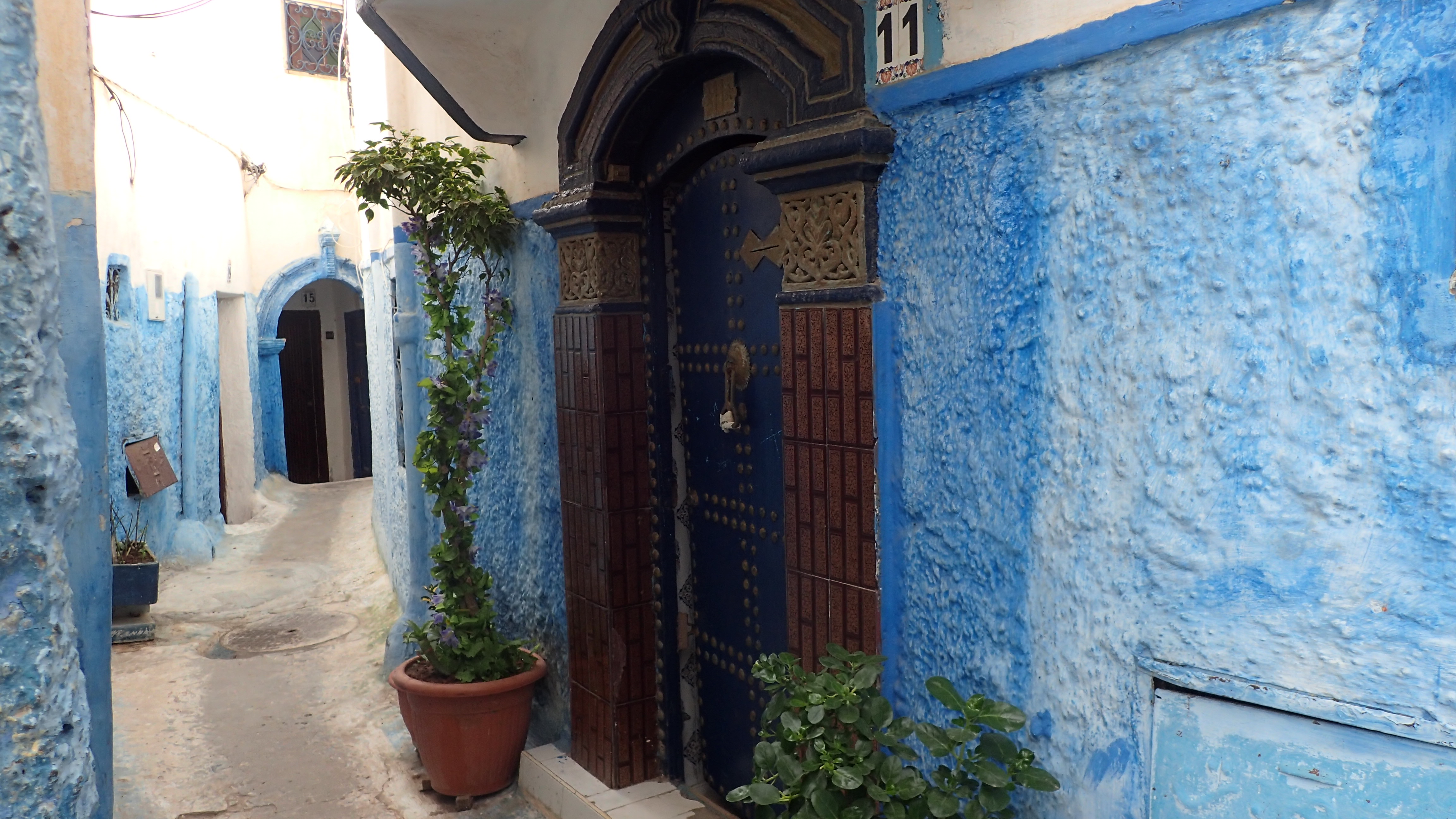 Now it contains a beautiful village, bright blue and white walls, beautiful dark wood doors, and full of narrow winding alleys dead-ending into someone’s doorway. There are a few shops and vendors selling souvenirs, but mostly it’s just very peaceful. There’s also a beautiful walled garden there, as well as one outdoor cafe with a great view of the bay. 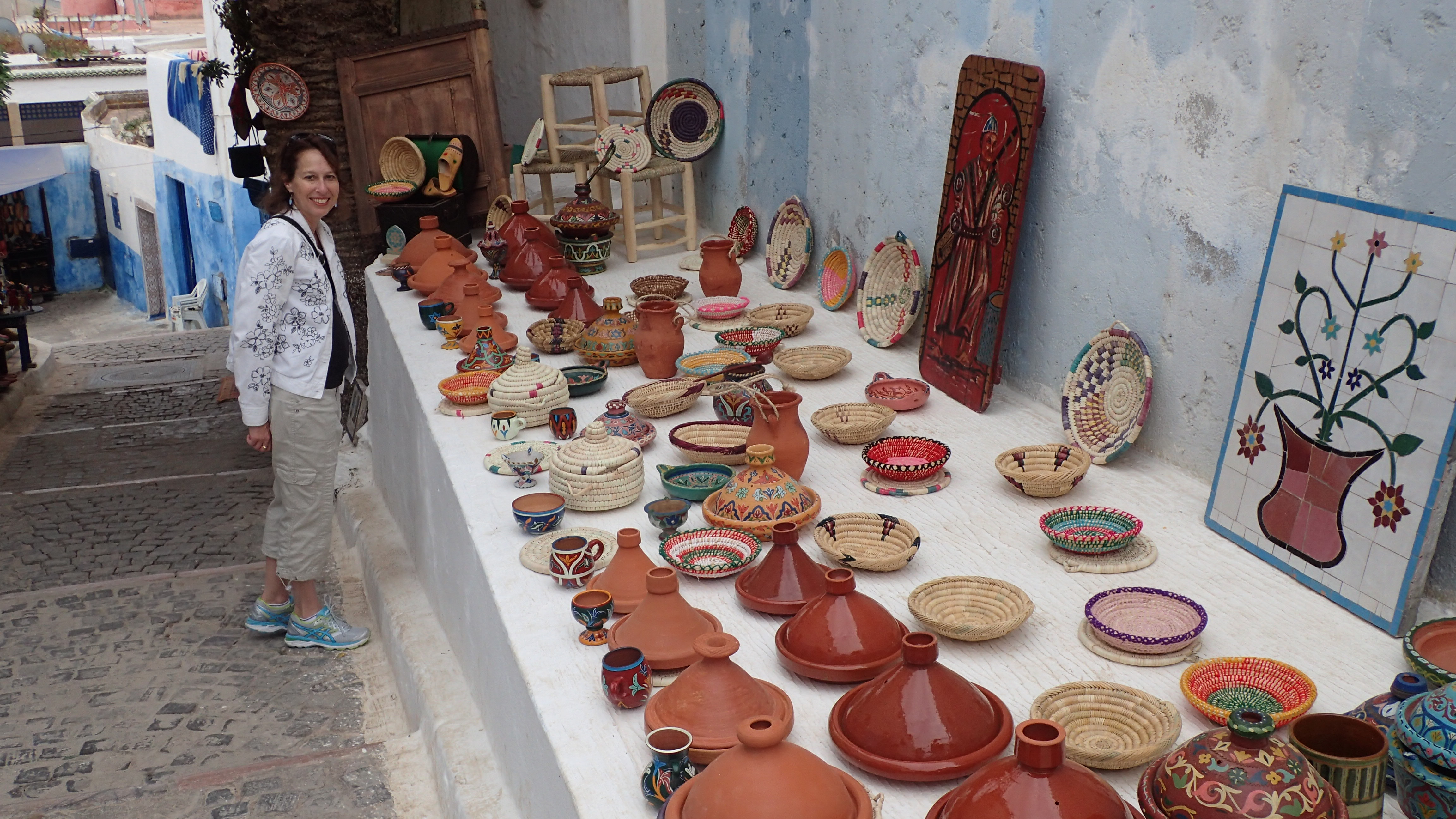 We met a man of 64 years when we stumbled into his alley as he sat outside his door. For some reason he felt friendly toward us and invited us to stay even though he was turning others away. We talked for over an hour about everything from his diabetes, to Trump, to  the incongruity between ISIS and Islam which he said teaches kindness and peace, to his birth in that very same house. I was even able to understand much of his French because unlike many people we’ve interacted with, he spoke clearly and more slowly. Yvonne of course had no problem!
The outside of his place was decorated with colorful pots; he had once been an artist. 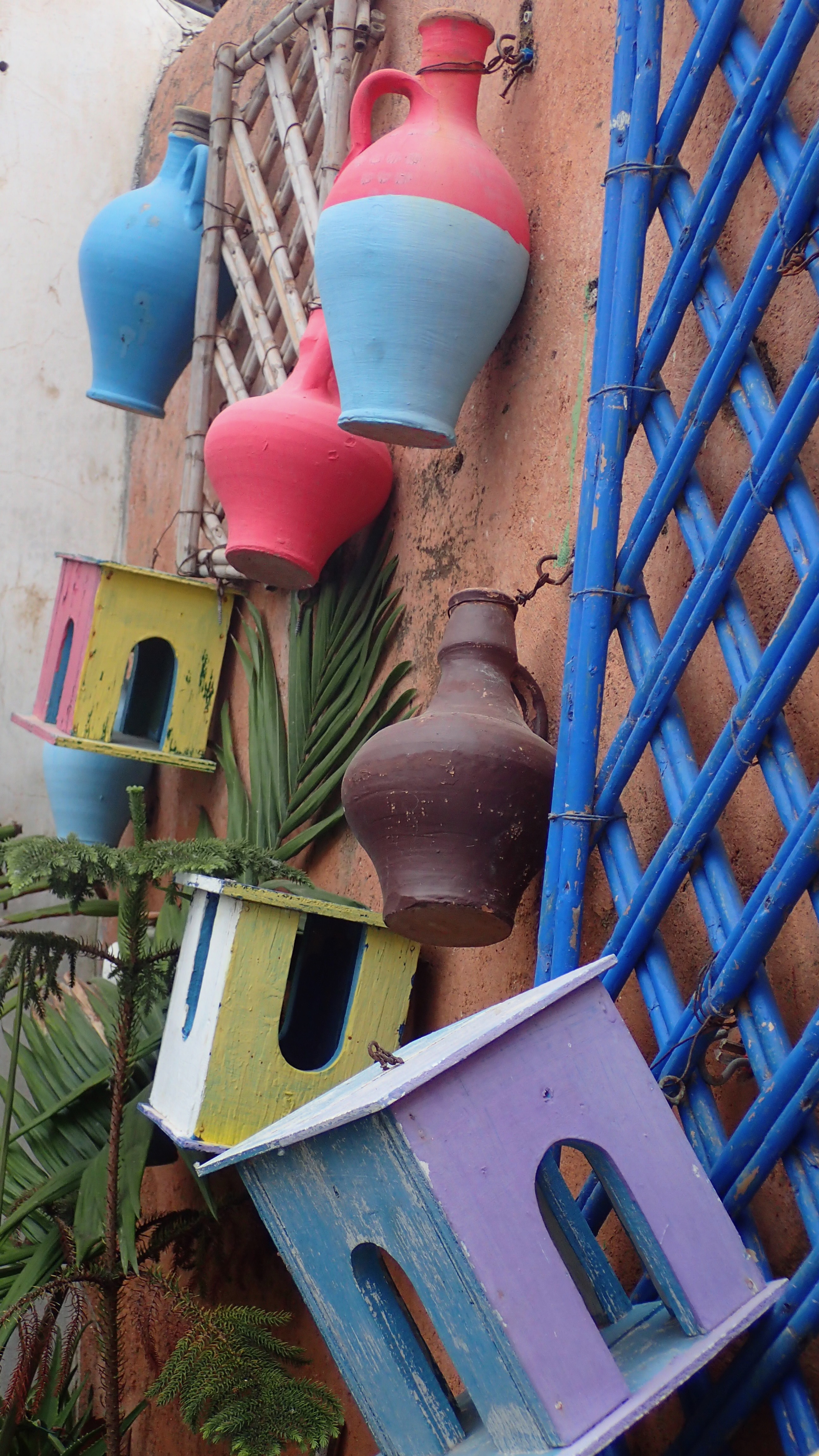 His house was gorgeous inside; he updated the entire interior with beautiful tile, carpets, woodwork and many paintings of his favorite place, Santorini. I didn’t want to impose by taking pictures of his home but this photo of his front door gives you a glimpse inside. 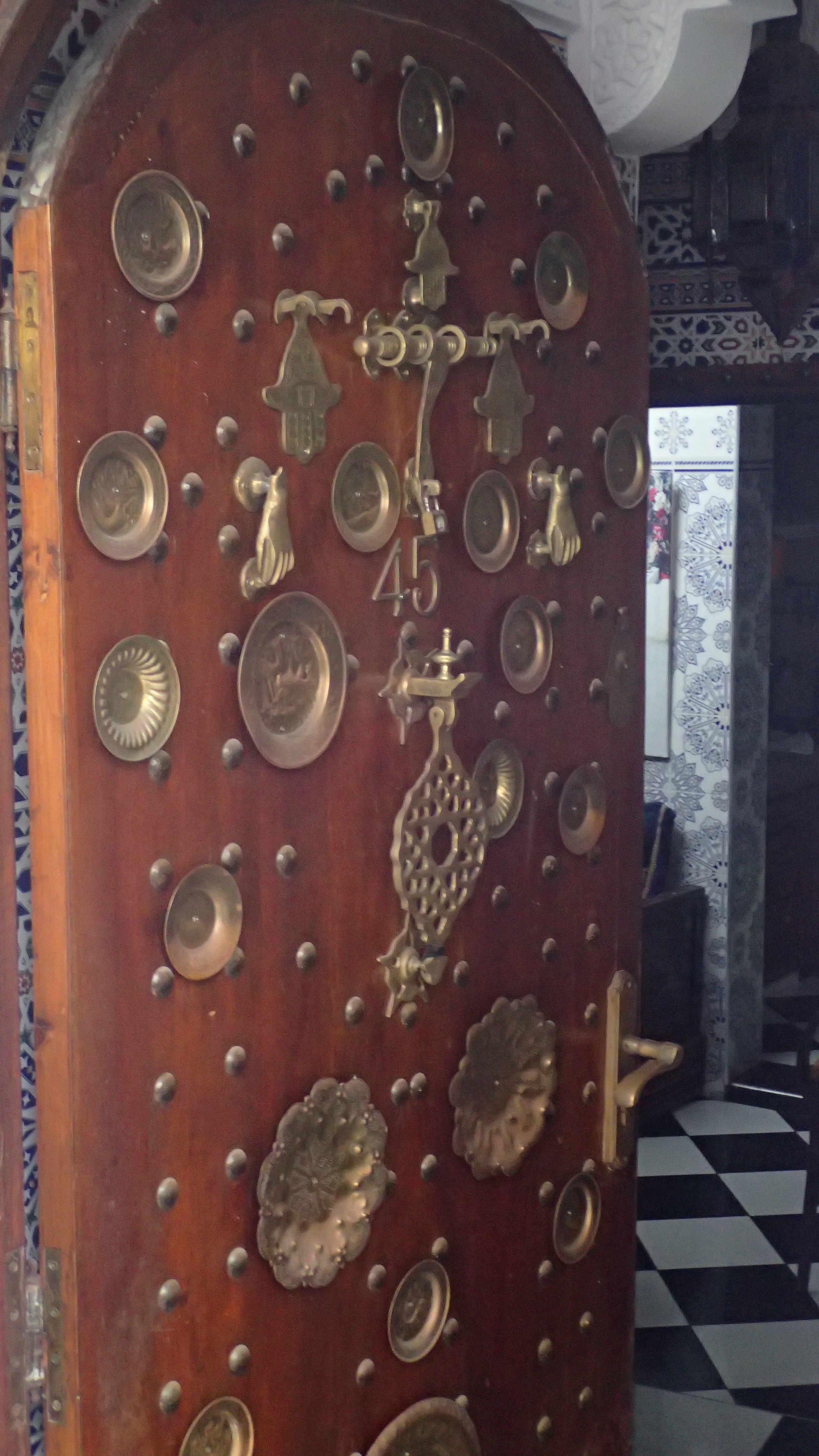 As we left the kasbah, Yvonne was accosted by a woman who grabbed her hand and started doing a henna design on it. Yvonne said no. The woman pulled her sleeve up further, and continued as Yvonne continued to protest. We told her we were not going to pay but that didn’t stop her. When she was done she asked 100 Dh (about $10), then dropped to 50, then 30. I gave her the 7 Dh in my pocket and she was not pleased. “C’est tout!” I exclaimed, which probably is not good French. 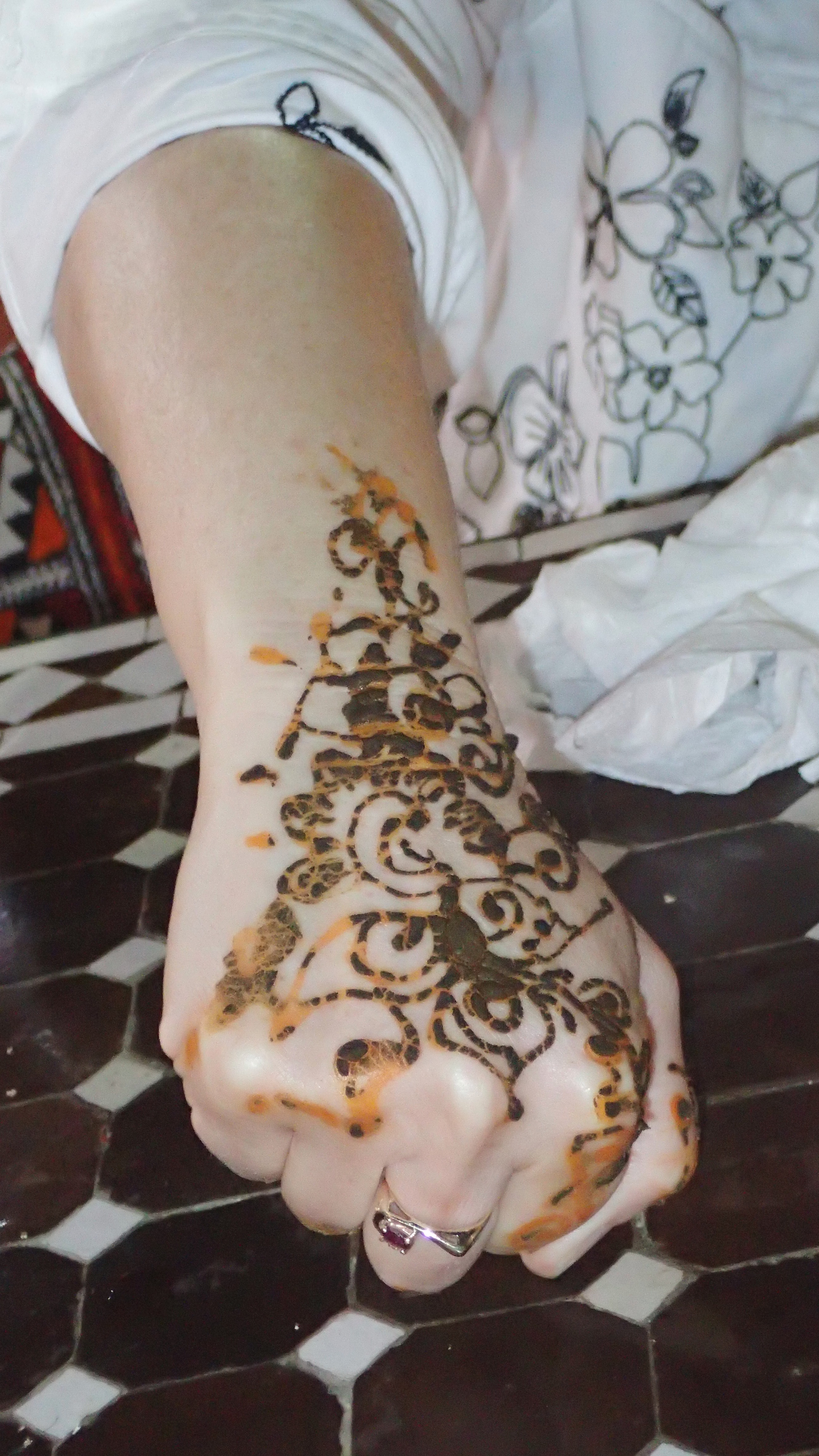 We learned that one must sometimes be extremely forceful next time, including pulling one’s arm away while yelling “NO!” Not easy for nice people like us! The henna design looks nice though.
Finally we made our way back through the medina as the shops were closing and ate dinner at an amazing restaurant, Dar Naji. 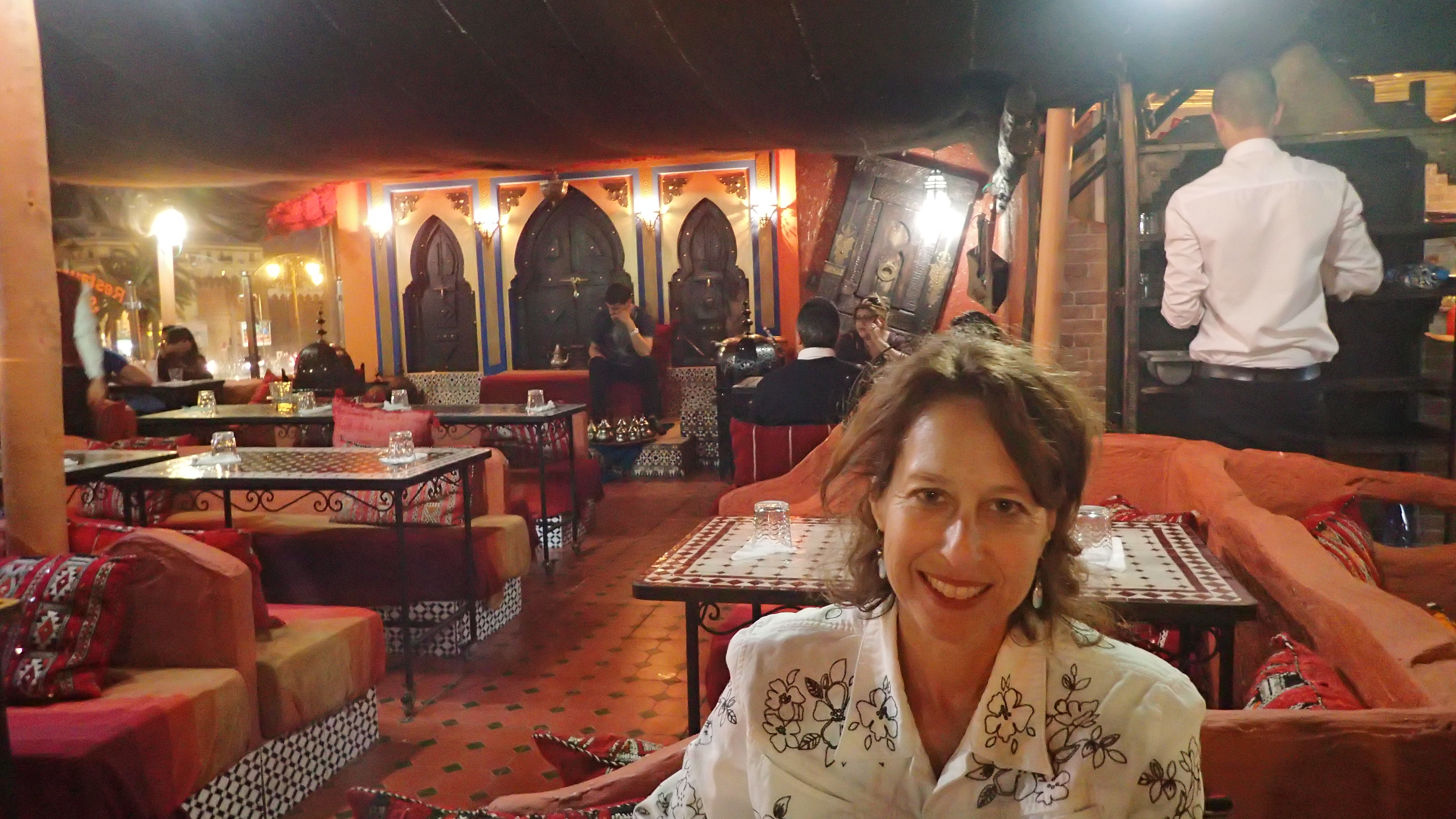 It looks touristy but there were plenty of Moroccans eating there also. The food was delicious. We had a salad in 3 parts: Roasted eggplant, roasted chopped tomatoes, and carrot. Then a chicken pastilla and beef with prunes. And I had no idea how good mint tea could be until we had it in Morocco. Fresh mint seeped in REALLY hot water, with sugar mixed in. You don’t need dessert, this is perfect!

The entire thing cost us about $17 including a $2 tip. After that, we took a taxi home ($2) and went to bed in our beautiful hotel room. A full day!