Here’s Looking At You, Kid

In my last post, I mentioned how Islam is woven into the fabric of life here. Back in the U.S., some people view the call to prayer 5 times per day as a ridiculously stringent requirement. But if you were a devout practitioner of any religion, how great would it be if 5 times a day, you were reminded to think of God for a few minutes? Here’s what I’ve seen in the cities of Morocco so far: When the calls of the imams go out (and many mosques have them so you hear it everywhere), those who want to pray for a few minutes go somewhere private to do so. Those who don’t work might take time go to the mosque if they want. But many people ignore the call; you can’t always just drop everything to pray at a moment’s notice.
On Fridays more people go to the mosque, or at least take time to pray. Yvonne was teaching a workshop last Friday and 2 women in the group went missing after lunch. They had gone to pray and everyone had to wait for 30 minutes until they got back, which was completely acceptable to the other participants.
We have now been in Casablanca for 6 days and I have pretty much seen everything a tourist would be interested in seeing. This city reminds me of of growing up in Manhattan, when New York was still dirty, polluted and full of dangerous traffic. Casablanca is dirtier and noisier still. Cars honk incessantly. But on the positive side, the street names are generally well-marked compared to Rabat, so exploring on foot is easier. And there are definitely some things worth seeing. I will do a second post soon where I will focus just on architecture, with more photos. For now, I’ll talk about my experiences in “Casa” thus far.

This morning I walked to the Habous Quarter, where in the 1930s, the French built a new medina-ish neighborhood because the real one was overcrowded. This one has trees, wider alleys, and proper construction methods. Many shops have glass display windows, and so have a far more modern look than the real medina shops. Every other shop sold leather slippers and/or djellabas and/or silver trays and teapots. Many Moroccans were shopping there too. It’s a lot cleaner than the real medina. Because it’s more contained, it’s harder to get lost, but it’s still surprisingly easy.
On the way, I passed a horrendous traffic jam on the main road through Casablanca. In the traffic circle at the heart of it, there was a policeman directing traffic as best he could. A driver at the edge of the circle called to him. Recognizing the driver, the policeman left his post, walked to the car, gave the driver a kiss on both cheeks in the Moroccan fashion, and then they talked for a minute before he went back to his post and got back to work.

The Great Mosque of King Hassan II is not to be missed if you come to Casablanca. Built in the late 1980s, this is one of the few mosques in the country which non-Muslims are allowed to visit, and they give tours in several languages. It has the tallest minaret in the world at 689 feet. The tour guide said that the entirety of St. Peters’s Basilica could fit inside it. The photo doesn’t do justice to this architectural masterpiece, which was extraordinarily beautiful. I’ll post more photos in my upcoming Architecture Edition to give you a better idea of what it was like.

The next day we went to the Corniche, where you can take a really long walk along a pedestrian path, or you can go down a few steps and walk on a nice sandy beach on the edge of the Atlantic Ocean. Being a Sunday and sunny, there were tons of people enjoying  it with us: Large groups seated in a circle visiting together, young men playing soccer, and other young men offering horse or pony rides. Yvonne took the bait.

What’s that you ask, why are there horses but no camels? Well that’s because they don’t have camels in Morocco, they have dromedaries. And a kind old man who spoke only Arabic had a dromedary to pose for photos, or to ride. We decided to save our dromedary experiences for later in our trip, but we did take this photo.

At the end of the beach there is a small island which some people visit when they need spiritual counseling or healing. You used to have to wait until low tide to walk across the mud and stones to the island, which houses the mausoleum of a Muslim saint. But a few years ago they built a nice cement footbridge.

Behind the village is a small promontory where you can buy not just tea, but also healing performed by a woman who sacrifices chickens as the heart of her craft.  When we arrived, there were several chicken carcasses strewn on the ground. I saw her holding a live chicken by its feet. She sat it on her head for a moment and then waved it around herself 3 times before tossing it away. The chicken survived, for now.
Only 1/4 mile away and also along the water is the Morocco Mall. Amazingly modern, with a 2-story aquarium in the middle and a giant IMAX theater (currently showing Guardians of the Galaxy 2 in 3D), it houses the same chain stores you’d find anywhere else including Burger King and Gap. There’s also a Disney-like “souk” you can wander through with a few shops selling traditional items. It’s all a strange counterpoint to the superstitious traditions next door.[youtube https://www.youtube.com/watch?v=QKMxCUT6e1c&w=560&h=315]
After all of that, we went back to our hotel, cleaned up, and then went off to Rick’s Cafe for dinner. As an aside, let me tell you that the taxis in Casablanca can be really annoying. They are regulated and are supposed to have meters, but many of them don’t.  We’ve taken enough taxis that we know about what a ride should cost: 7-20 Dh ($.70 – $2) depending on the distance and traffic. These rogue drivers always quote you 50 Dh and then you can haggle down the price, but it will never be what it should be. Either way it isn’t a lot of money for an American, but I want to reward the drivers who are playing by the rules. So we simply refuse to get into a taxi that doesn’t have a meter. And I always give the legal drivers a good tip, which they genuinely appreciate. 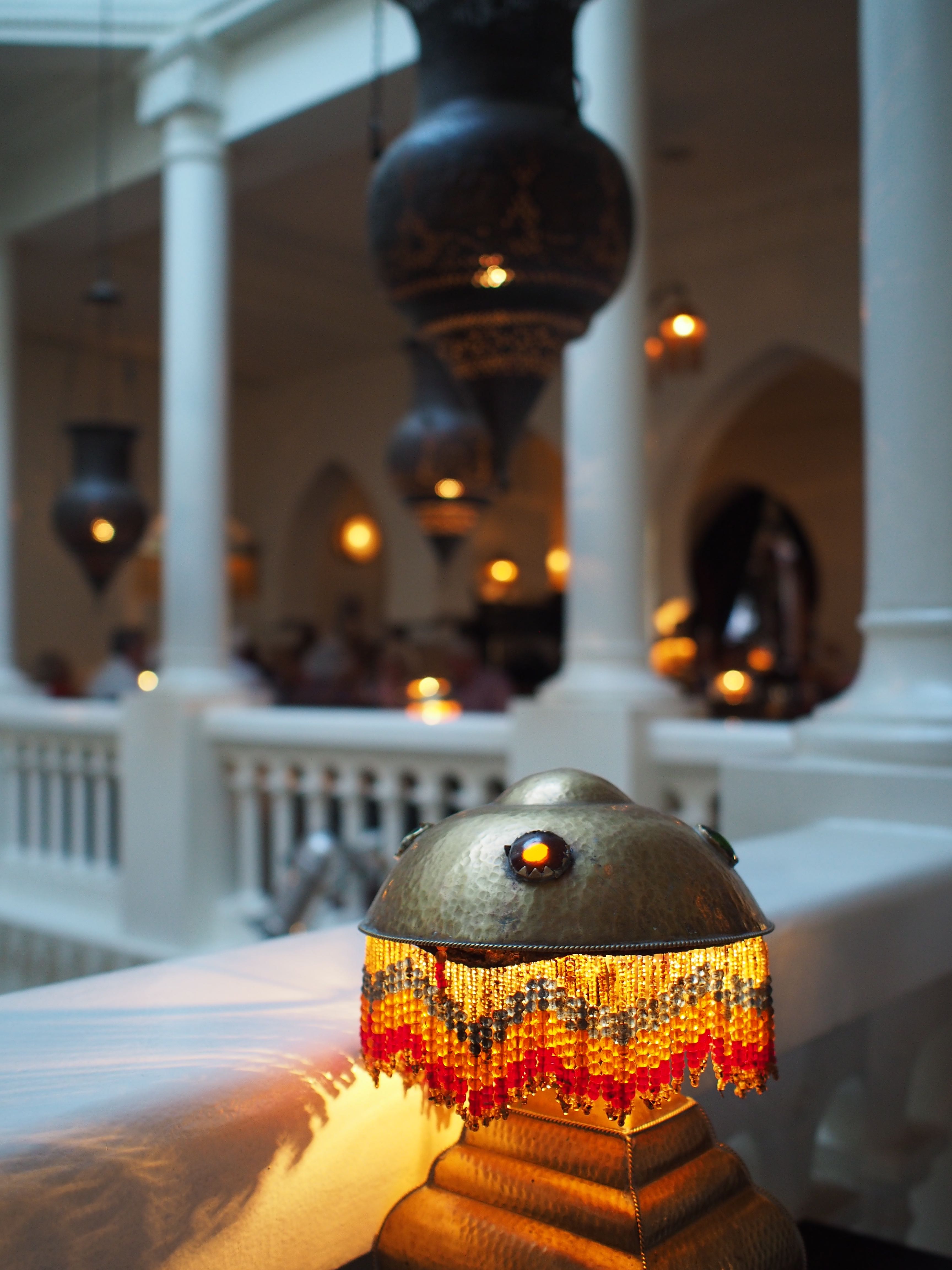 Anyway, Rick’s is a lovely place. Started by an American expat, they do their best to recreate the decor and atmosphere of Rick’s in the film Casablanca. There were several large groups of tourists leaving as we arrived. But as I’ve observed in several of the touristy places we’ve been, there were also a number of Moroccan couples.

In a lounge upstairs, the movie plays silently on a TV. The wait staff wears fezes (is that a word?). We sat at a table upstairs overlooking the central area of the restaurant, where an excellent jazz quartet jammed. No, they didn’t play As Time Goe

s By while we were there. I had an excellent Negroni with my grilled swordfish, and Yvonne had a Mojito with her sea bass.
When we were done with dinner, we went downstairs and sat at the bar to enjoy the music. The song in this video was Summertime, which they played while we were having dinner on the balcony above.[youtube https://www.youtube.com/watch?v=94YaJ4fr5ys&w=560&h=315] It was a really enjoyable evening out.
One of the things downtown Casablanca is known for is its French Art Deco architecture, and today I walked downtown to see it (again, I’ll post some photos in the Architecture Edition). Appreciating how I like to explore, our hotel concierge made me a lunch recommendation which I enjoyed immensely:

There’s a big market downtown called Marche Central, which is full of stalls selling flowers, produce, meats, and especially seafood. The stall in the photo is just one of about a dozen vendors selling all sorts of seafood.

I bought a pound of salmon for 70 Dh ($7). The manager of a restaurant stall a few meters away walked it over there, where they grilled it perfectly and served it with bread, Moroccan lentils, a tomato salad, and a bottle of Coke for an additional 35 Dh.