On our first day in the Galapagos, we had one of several opportunities to witness something that normally isn’t easy to see up close: Avian courtship. Also, really big iguanas. But I’ll talk about the iguanas in a future post. I should state for the record that I am not a birder, but during this trip I became a temporary convert.

The Galapagos Islands are famous for their bird life. Charles Darwin observed the differences in the beaks of the otherwise-similar finches on the various islands and surmised that they had developed their differences to deal with differing environmental conditions. These and some other bird species are seen nowhere else on earth, while others, though they also exist elsewhere, have long made their homes here. But as I will keep mentioning, all of them had no fear of us humans.

On our first walk, blue-footed boobies were not only nesting, they were courting. Normally this only happens once per year, but if food is plentiful they will have a second go-round. The male tries to impress the female by picking up sticks and grass and laying them on and around his feet. I’m not sure whether this one was successfully impressing his intended or not, as he didn’t seem very motivated: 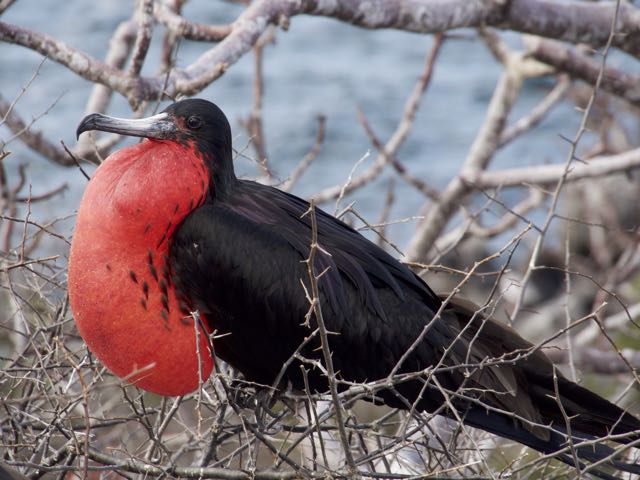 The next day, we visited North Seymour Island, where frigate birds nest. The males inflate a red pouch under their necks, which takes about 20 minutes. After that they just stand around showing off, waiting for the females to line up and admire their huge pouch. 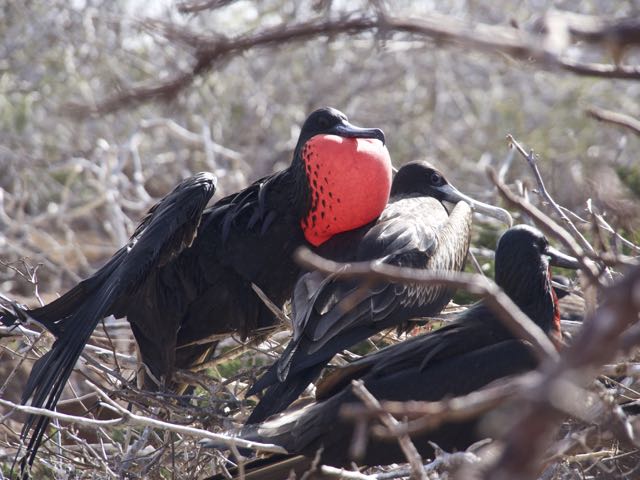 Once he is paired off with a female, she will sometimes rest her head on his pouch. Or conversely, he might rest his pouch on her back.

There were also plenty of nests, babies and juveniles to be seen. Often the males sit on the eggs while the females look for food.

Frigate birds tend to be scavengers. They can’t dive for fish or land on the water. They often steal from other birds, each other, and even sea lions if they can get away with it. They’re a rowdy bunch.

Once, I watched from our boat as six frigate birds followed us for a two-hour trip. We traveled down wind and they almost never flapped their wings, except when attacking each other for no apparent reason; unruly siblings on a long trip in the back seat of a car.

Later on the trip, we visited Española Island, populated by Nazca boobies, albatrosses, sea lions and marine iguanas. There, we got to see courting displays for the ages.

Interestingly, albatrosses and Nazca boobies have vaguely similar courting rituals, at least to my non-bird-expert eyes. I don’t know if this is always the case or if they have changed their behaviors due to  cohabitation on Española.

The albatrosses: Watching them was absolutely mesmerizing; I could have stayed for hours. I am thankful for video because there’s no way I could effectively communicate in words how enthralling and funny they were. Albatrosses are monogamous, but the couples still court every year, and it goes on for hours. We humans could learn a thing or two from them about keeping the romance alive in a relationship.

A few days into our journey, we were able to see two birds that I didn’t even know lived in the Galapagos: Flamingos and penguins. The flamingos are only seen on a few islands, and there are only a few hundred in total. So, we were fortunate to see any.

Just as hard to find were Galapagos Penguins, the only penguins that live north of the equator. The same cold water that shocked my body every day when we went snorkeling is what they need to survive. In fact, my first sighting was while snorkeling, when it suddenly came barreling right over my shoulder from behind me, swimming like a bat out of hell and disappearing into the distance within seconds. The second and last opportunity was much more relaxed, and I was able to record this video while I was in the water and the penguin was sunning himself at the water’s edge.

We saw lots of other interesting bird behavior that I never thought I would care to relate to anyone, such as a Galapagos dove who felt threatened by our group—about the only creature to behave this way during our trip—and responded by pretending to have a broken wing. Our guide was stunned, exclaiming several times that it was extremely rare to see this. We saw Darwin’s finches fighting for territory, which was quite a spectacle: It started with 2 birds, scratching angrily at the ground and kicking up bits of dirt at each other. Then the numbers on each side started to multiply, all of them posturing and chirping at the opposing side, looking like the Jets and the Sharks in West Side Story. 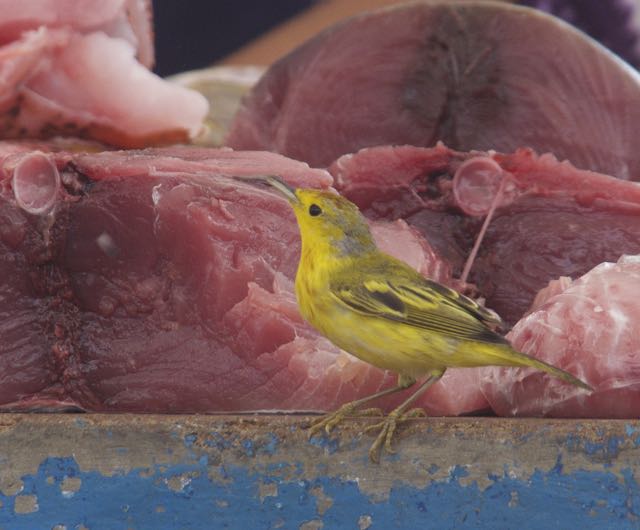 There were so many other birds— mockingbirds, herons, pelicans, hawks, sandpipers, and more. But I will leave you with this beautiful female yellow warbler, hanging out in front of some fresh tuna at the Santa Cruz Fish Market. But that’s another story.