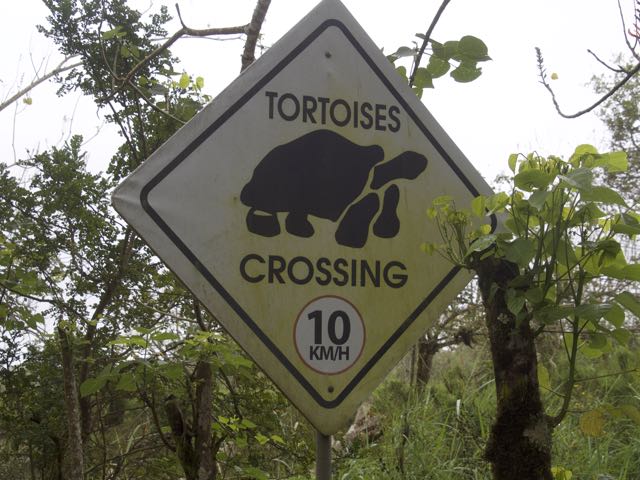 During the 17th and 18th centuries, at least 150,000 tortoises were taken from the various islands of the Galapagos, mostly for food and later, for oil also. The Galapagos were a way station for Pacific whaling ships and fur seal hunters. Because they’re so slow and have no fear of humans, the tortoises were easy pickings. Each ship would take dozens, sometimes hundreds, of tortoises and keep them in the hold stacked on their backs, alive. They could live up to a year that way, providing fresh meat for the sailors as they slowly starved. Even Charles Darwin thought little about how the constant taking of tortoises for food was bringing about their near-extinction, or how the introduced animals, especially rats, were decimating the endemic birds and reptiles who laid their eggs on the ground. Naturalists were not necessarily conservationists. 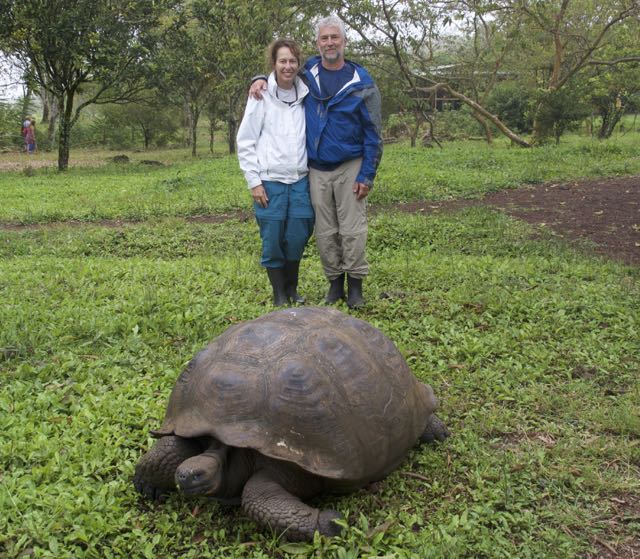 The one population that was somewhat less impacted was on the large island of Santa Cruz, where the tortoises live way up in the highlands. Their location made it too difficult for whalers to haul them out. This is the one place where anyone can see giant tortoises in the wild. A couple of ranch owners have converted their properties into ecotourism havens and you can walk among the hundreds of tortoises roaming free. They are even free to wander off the properties if they want to.

It is fascinating and amusing to watch these clumsy, lumbering giants. More than once, I saw a tortoise try to climb over a log but his foot slipped off, his weighty carapace (shell) hitting the ground with a loud thunk that I could feel under my feet. He continued onward, unfazed. We observed one trying to eat some leaves on the ground. His mouth kept missing the food for no reason other than a lack of coordination, and after several failed attempts, he just moved on to another pile.

Simple things seem ridiculously difficult for them and yet with no natural predators, they manage to thrive. The males are twice as big as the females and I can only imagine what mating must look like. Especially when the females run away.

The Charles Darwin Research Center, also on Santa Cruz, does research on all of the life and ecosystems on the islands while running a very successful tortoise-breeding and repopulation program. There were pens with dozens of young tortoises, each marked with a colored number; the colors indicated their islands of origin. When they are four years old with a shell perhaps 8″ across, they will be released into the wild. The goal is for the tortoise populations to become self-sustaining, which has already occurred on some of the islands.

The center also advises the Ecuadorian government on the management of Galapagos National Park. Now the management is so strict that our suitcases were dog-sniffed and x-rayed at the airports at both ends of our flight in order to keep fresh foods and accompanying insects out. Not even our carry-ons were immune, as the flight attendants walked down the aisle and sprayed some kind of fumigant into the overhead compartments. 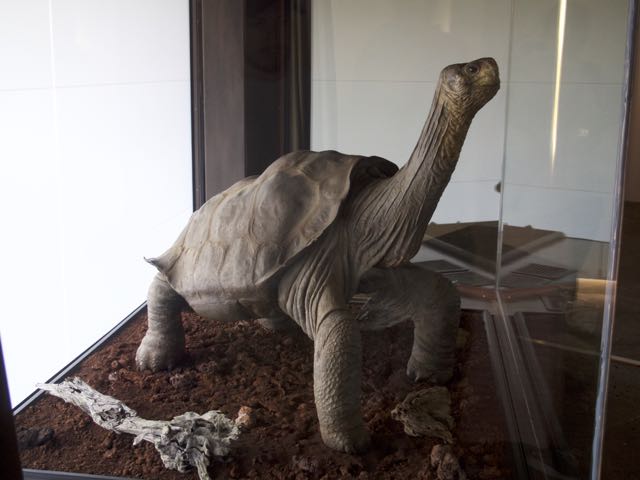 When Lonesome George died in 2012 (at the age of 153 according to our naturalist), the Research Center hired the best taxidermist they could find to preserve him as perfectly as possible and then put him in a glass-encased diarama. That was his only legacy; when he was found on Pinta Island in 1971, he was the last tortoise there. The Research Center tried for years to get him to mate with females thought to be genetically similar, but the eggs were never viable. At the Research Center, the room you enter to visit His Stuffedness is temperature- and humidity-controlled; upon both entering and exiting the exhibit, you wait for two minutes in climate purgatories between two sets of doors. 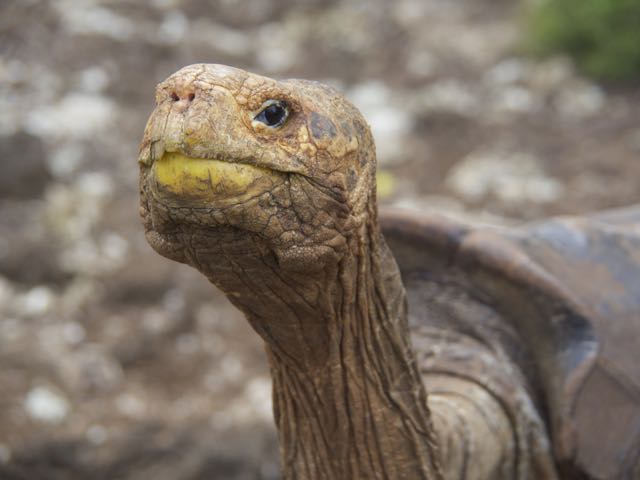 But then, there’s Diego, who lived at the San Diego Zoo. The tortoises of Española Island were nearly extinct. Only 2 males and 12 females remained in the wild, on the brink of extinction, so they were moved to the Research Center. After it was determined that Diego also was from Española, he was permanently relocated to join his cousins in a breeding program.

Diego has since fathered over 200 children, single-handedly saving the tortoise population of Española (well, the other males helped but he was by far the most prolific). I joked about Diego’s success being due to his long… um… neck. It turned out that a long neck really is a useful trait for survival and he has it in spades.

Somehow, a group of tortoises ended up in a remote area of Isabela Island. The official version is that whalers must have left them there to lighten their load for some reason.

The unofficial, but well-documented, story is that they floated there after an American buccaneer sank three fully-laden British whaling ships in the area. Often the whalers would gather tortoises from several islands. Amazingly, genetic testing revealed that many in this Isabela group had significant amounts of DNA from several species. One species, from Floreana Island, had been extinct for over 150 years. Other species were found too, but sadly, Lonesome George’s was not among them. By careful breeding and testing of these tortoises, researchers are hoping to repopulate other species that were thought lost forever.