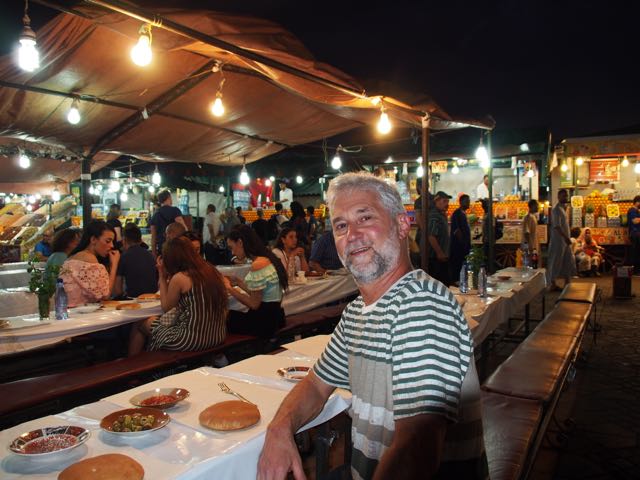 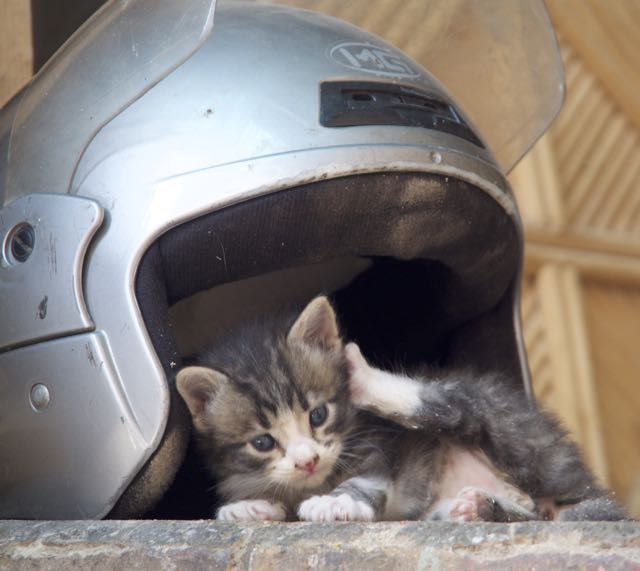 It turned out that the food was laced with antibiotic, and was provided to him by a veterinarian who distributed the food for free so residents could help the cats. As we talked, the vet happened to come through the alley. She grabbed the sick cat by the neck and put drops in its eyes, then walked a few yards and did the same with another cat she passed.
Yvonne has an amazing ability to  connect to people with humor. As we walked back to the square, a shopkeeper in his 20s regaled us with “come have a look!” Yvonne decided to talk to him, and we learned that he only worked evenings, so that he could play with his young children during the day. Yvonne decided to let him take her inside to look at leather goods. I waited outside; there was a nice breeze and an amateur Gnawa group was drumming nearby. After a few minutes, the young man came out laughing with Yvonne.

He said, “OK!” and we shook on it. We told him we’d be back the following night to complete the deal.

The next day, we headed for the tanneries. These are far, far away from anything else in the medina for reasons which will soon become clear to you. The tanneries in the Marrakesh medina have been operating in the same place, using the same methods, since the 11th century- nearly a thousand years.

Due to a minor hotel snafu we weren’t able to get going very early. By the time we arrived at the tanneries, it was well over 100? F. 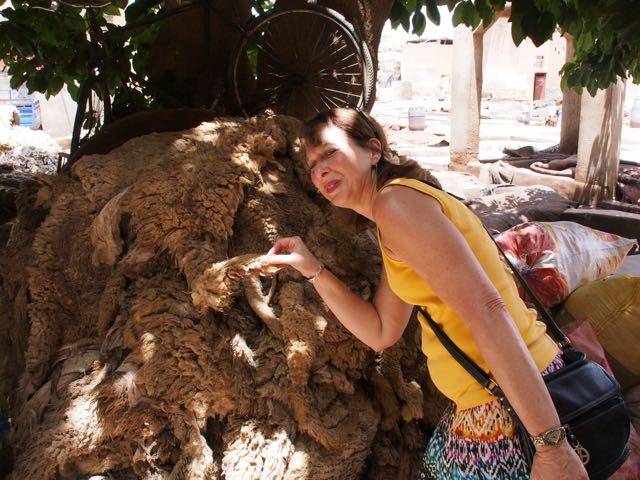 We were met by a man who provided us each with a big sprig of mint leaves to sniff (slightly faded from the heat), and he led us in to explain the steps of traditional tanning.  I have come across other descriptions of the process that don’t exactly match his, but this is accurate enough.

When the calf, goat, and camel skins arrive at the tannery, they are first soaked in a solution of lime, water, and salt for about a week to make the hair easy to remove. They are removed from the vat, cleaned, and set out to dry in the sun.
Next, they are soaked in a solution of pigeon poop, cow urine and wheat. They stay in these foul-smelling vats for another week, during which they magically become supple.

At this point we appreciated the mint we were given to put under our noses and mask the smell!
Finally, they are soaked in various dyes as needed, and one more time they are set out to dry in the sun. 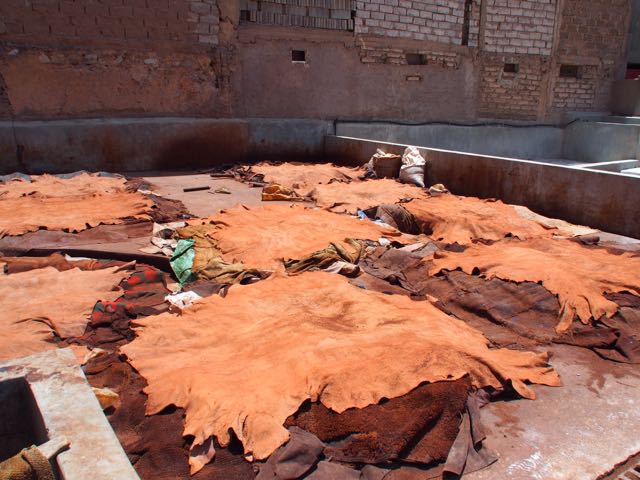 Now they are ready to be sold. Tannery representatives put them out for display every morning in another area, where tradespeople will choose what they like and then turn them into belts, handbags, slippers, and ottomans. 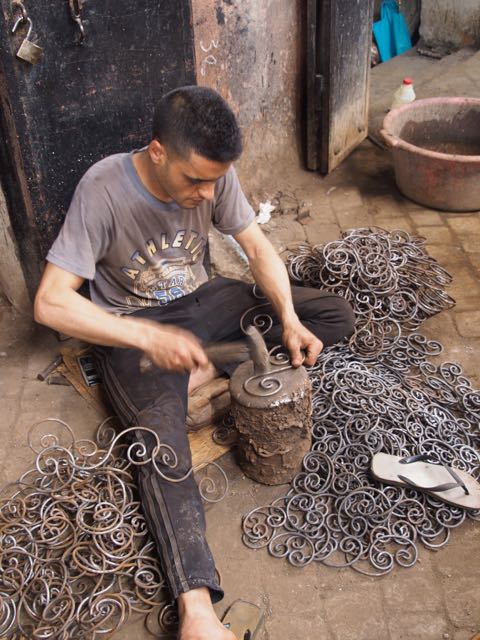 After finishing our tannery visit, we took the long, hot walk back into the central part of the medina to visit another area we were interested in- the metalworkers souk. Dozens of men hammer, weld, and cut metal (in the shade) to make everything from lamps to cast-iron pieces. The sounds of hack saws and pinging hammers are everywhere. 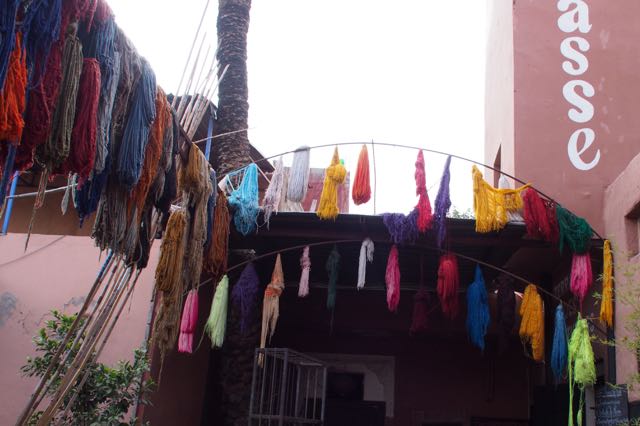 Next, we visited the small wool souk where wool is dyed for use in carpets and other fabric products. It was pretty but there wasn’t much to see, really. A young man in a shop demonstrated some of the natural dyes that are used: poppy (red), saffron (yellow), indigo (purple) and cobalt (blue). Many of the dyes used today are synthetic, but of course he didn’t show us that! 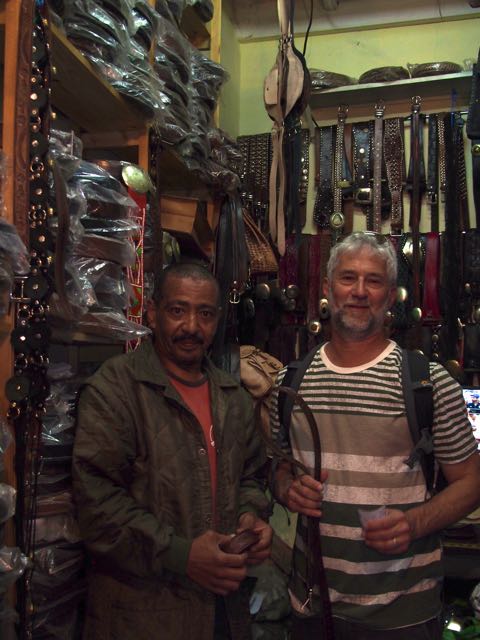 Finally, we discovered the enormous leather souk– multiple alleys with shop after shop selling various leather goods, all made in Marrakech, much of it from leather produced in the tanneries we’d visited. I’d been searching for more belts and finally hit the jackpot.

On our way out of the medina, we went by the shop of Yvonne’s husband-to-be. I wanted to check on how his delivery of livestock was coming, but he wasn’t there. This was very unfortunate because it was our last evening in Marrakech! C’est la vie.