But when you are only spending a little time in the most touristed places, it’s natural to get a very skewed view of Morocco because it seems like everyone wants something. “Come look, just take a look!” can get very tiresome when you’ve heard it 300 times during an afternoon in the Marrakesh medina. The surface view is so exotic for many westerners that it’s difficult to see what’s under it in a short time.

Even after living here for a month, I can only claim to have learned a bit, and only about city life thus far. Truly understanding Morocco and its culture would take far longer than the two months I have. But I’ve been finding that there is so much more to Morocco than what I would have discovered on a shorter trip.  My advice if you’re coming: Try to talk to people every chance you can. Even if they’re trying to sell you something, our experience is that if you kindly (or humorously) ask them about themselves rather than their “stuff,” they tend to open up pretty easily.

Having time to do more than just take tours has been really enriching. During our time in Marrakech, I took a cooking class to learn how to make some traditional dishes like Chicken Tagine with Olives and Preserved Lemon, and Roasted Pepper and Tomato Salad. They take up to 10 people. But I was the only person who registered, so I had a private session!

Yesterday, I took a 90-minute lesson in Darija, the Arabic dialect which is spoken here in Morocco. For the first time, I have some understanding of how to speak the language. I need to expand my vocabulary beyond 15 words, but at least now I can pronounce them correctly! I also took a 2 hour oud lesson a few days ago with a talented, older man who spoke only French and Arabic. As I play guitar already and understand some theory, it was pretty easy for me to learn the basics and have fun with him. The language of music overcame any barriers in spoken language.

Speaking of music, I want to give a shout-out to our friend Meryem Eshoul. Meryem is an MBA student studying in Strasbourg, France, home on a break. She’s the daughter of Yvonne’s Moroccan colleague who lives in Casablanca, and she visited Tangier and Marrakesh while her mother worked with Yvonne in those cities.  I was fortunate to be able to spend a lot of time with Meryem, walking around and talking about life. Anyway, one thing she does for fun is to sing in a band in Strasbourg. And she has a spectacularly beautiful singing voice:
And then there was Rashid, a 30-something waiter in Tangier who we befriended one evening because he was so friendly and outgoing. On his day off, Rashid and I got together for what was supposed to be an hour; our visit stretched into most of the day.

He grew up in the gorgeous, famously blue town of Chefchaouen which Yvonne and I will be visiting this weekend. He attended university to study English Literature, but decided to take a different path. Now, Rashid plans to open his own restaurant in a few years. I can only say that he is one of the kindest, gentlest men I have ever met. To any Moroccan ladies out there who are looking for a husband: He’s available, and you won’t find a better man!

In a previous post, I talked about avoiding the taxi drivers who refuse to use the meter and rewarding those who do. 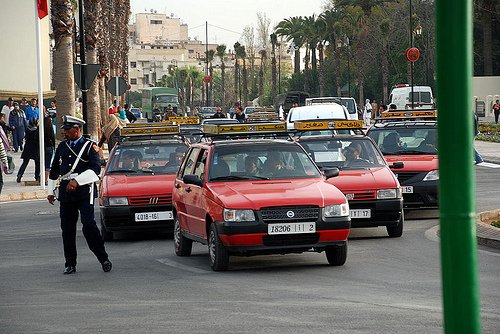 In Marrakesh this is nearly impossible unless you’re Moroccan. All taxis have a meter– it’s required by law– but for the most part they refuse to use it with tourists, and they sometimes quote outrageous prices. We had to settle for negotiating our fares, knowing from experience what our best price will be.

But not always. One taxi driver seemed offended when I asked him to use the meter. He snapped, “What do you see here?” and pointed to the already-running meter (there was another passenger in the taxi, which is common in Morocco). When I apologized and explained that most taxis refuse to use the meter with tourists in Marrakesh, he asked, “Are you a tourist? Aren’t you living here right now?” Then he told me there’s a saying in Morocco: If you stay in a place for 40 days, you are one of the people. When I told him we’d be here for almost 60 days, he joked, “then you will be Moroccan and a half!”