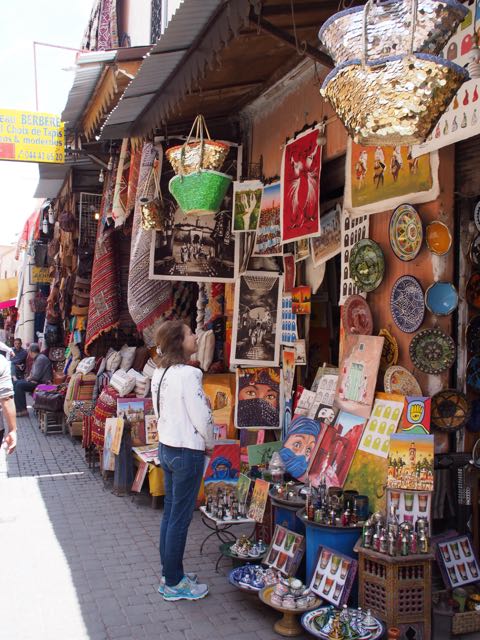 Well, not quite; the Fes medina is even bigger. Nonetheless, the Marrakesh medina is far, far bigger than the others we’ve visited. That first day, Yvonne and I wandered: Across the huge main square called Jemaa el-Fnaa, into a spice market and through alleys both covered and open, filled with shop after shop selling everything a tourist could ask for. If we were lost in the other medinas, we could just walk in a direction and we’d soon find an exit. But the Marrakesh medina is about 10 km in circumference; pick the wrong direction to navigate the maze and it could take hours to get out.

We looked for landmarks to keep track of the route we took (“OK, we turn left at the Café Bougainville, then right at the shop with the piles of tagines“). I occasionally used Google Maps to locate our position and after 45 minutes of wandering, we’d barely moved out of the central section. It would have been completely overwhelming if we hadn’t already completed Medina Boot Camp.

Later that afternoon, we hired a guide to show us around a bit. Honestly, I don’t think it was really worth it, but he did bring us to a couple of historic places. We could have easily found them ourselves once we were well-oriented. But given Yvonne’s limited tourist time, it’s unlikely she would have had another chance. There’s just too much to see in Marrakech.

On Monday while Yvonne worked, I set out into the medina again. Armed with both paper map and GPS, I visited various historical places including the Saadian Tombs and the old mellah, or Jewish section. In the other medinas, the mellah was simply an area that used to be Jewish, but here there are still working Jewish businesses. I visited one synagogue which is now a museum, but looks like it could still hold services. 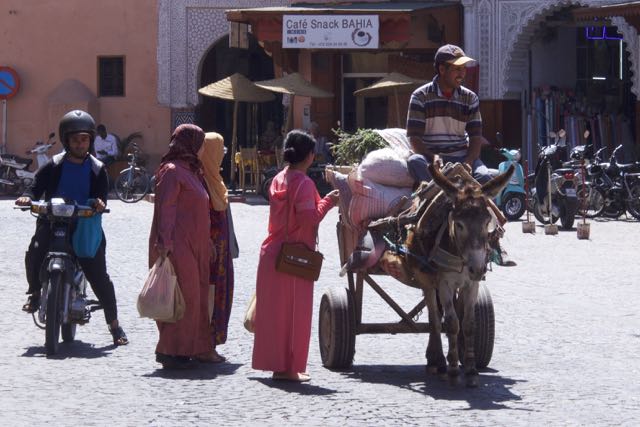 I wandered the alleys in the 100Ëš F heat, trying to stay away from the heavily touristed areas. I found myself in a produce souk with almost no tourists, but crowded with locals doing their shopping. I walked with my phone in my hand stealthily recording video, capturing a snapshot of life. You can watch it here. Enjoy a few words of my bad French along with an interesting tour! A vendor offered me a banana to eat, and it was delicious. I bought 100 grams of bananas for 1 Dh, about $.45/pound. Then I found a place to get some ice-cold fresh orange juice, and sat down in the shade to eat my bananas. 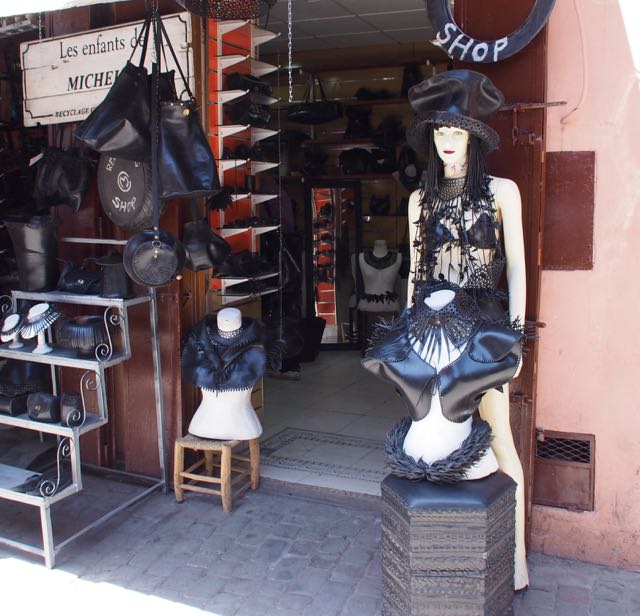 After wandering for about 6 hours, I had explored perhaps 10% of the medina. Some of the unexpected sights: The One World One Pastrami Cafe (featuring pastrami hamburgers!), located on a quiet and dusty street bordering the walls of a medieval palace; a souk with several markets dedicated to making things out of recycled tires, including the awe-inspiring Goth clothing at Les Enfants de Michelin; and solar panel arrays on the roofs of some of the medieval historic buildings.

During the day, Jemaa el-Fnaa is a paved open space, huge and hot, with a few juice vendors, snake charmers, and lots of people trying to sell things no one wants.

But at night, it comes alive with visitors both foreign and local. We got there around sunset, and the crowds were just beginning to gather. Story tellers acted out their tales. One man had a pair of flip-flops strapped over his ears as he regaled his audience, perhaps to look like an animal? He was speaking Tamazight (the language of the aboriginal Amazigh people), not Arabic, so even our friend Meryem couldn’t understand him.

Dozens of stalls were selling grilled meats and vegetables, while dozens of others sold freshly squeezed fruit juice; a glass of fresh orange juice is $.40. Musicians played traditional music.
As it got darker, the crowds began to swell.

We took a walk through some of the souks off of the main square. A seller of spices and oils gave us a very friendly demonstration of some traditional products. By the time we returned it was fully dark. The square was now an enormous carnival crowded with thousands of people playing games, listening to the music, getting their fortune told, eating, or just taking in the atmosphere like we were.

I could go on with photos and descriptions, but the only way to really get a sense of the Jemaa el-Fnaa at night is to watch this video I put together.