The Most Terrifying Potato In The World 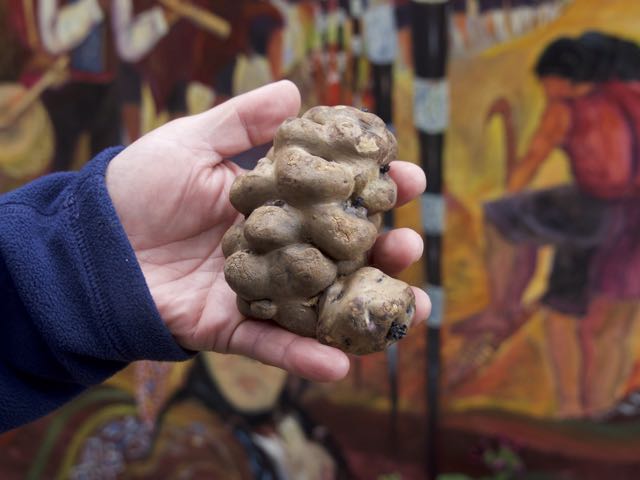 The most fear-inducing potato in the world, or at least in the Andes, is called cj’achun wakachi in Qetchua, which literally means “the daughter-in-law cries.” Traditionally if a boy wants to marry a girl, his mother will hand his intended one of these demonic, knobby potatoes as a test of her skill in the kitchen. She must peel the entire potato in a single, unbroken pass, or she will not be permitted to marry him. This is still done in some homes, and girls practice peeling for months. And you thought your mother-in-law was mean.

Thanks to the Incas, there are over 3,000 varieties of potatoes in Peru, 55 varieties of corn, and nearly 2,000 varieties of quinoa. By the way, I hated quinoa and its strange flavor until I tried the Peruvian varieties. I liked theirs so much completely different than the American-grown variety that we brought home a couple of kilos of a tri-color mix. It turns out that we can buy it in our area too, for ten times as much money.

The Incas optimized these staples to every altitude, soil type and climate. The wide variety of vegetable pollens that have been discovered at the circular terraces of Moray show an enormous amount of experimentation.
Farmers were told what to grow and weavers were told what to weave. Then Inca officials would collect food from the farmers and give them clothing from the weavers, tools from the toolmakers, etc.

People paid their taxes with construction labor. For example during fallow times, farmers would help to haul the massive boulders used to build temples and royal housing. In this way, the Incas always had a huge source of labor available. Our guide claimed that the people were happy to do this because they got so much back in return.

I take that claim with a grain of Maras salt. But whether the people were happy workers or not, Spaniards who witnessed Inca society wrote of their amazement at the standard of living of even the most rural families. Efficient resource distribution meant that everyone had a good variety of food, nice clothes, and everything else they needed.
Including chicha. Chicha is a mild corn beer, usually about 2.5% alcohol. People building the Inca temples could have all the chicha they could drink; maybe that’s the real reason they were happy to do the work.
The first time I tasted chicha was during the big anniversary celebration in Ollantaytambo. Yvonne and I walked by a woman sitting with a big kettle of it, fresh from her kitchen. A couple of male friends/customers were sitting with her, drinking the creamy, pale yellow liquid out of big 1/2 liter cups. When we stopped to check it out, one of the men offered us a taste out of his cup. It definitely tasted like corn, but slightly tart. I love sour beers, so this was right up my alley.

In the old days (and sometimes even now), chicha fermentation was started by the brewer chewing some of the corn and spitting it into the mix. Nowadays they usually just let it sit for a few days, in a clay fermentation urn covered with a towel; natural yeasts and bacteria in the air and the urn do the job just fine.
The men sitting with her told me that her chicha was “naturale, no alcoholico” which I interpreted to mean that it had no alcohol. I wanted to buy a cup but having just arrived in the Andes and seeing how sketchy her operation looked, we were afraid to drink more than the taste we’d had. I think they were all shocked when I didn’t buy any, and I suspect it was a small cultural faux-pas. Oh well.

Two days later during a private tour, we stopped at another woman’s chicheria (chicha bar). Here, I found out that traditional chicha is always alcoholic. Sometimes vendors will fortify it; the people that first night meant that it had no added alcohol.
Our guide and I were served the traditional chicha de jora, while Yvonne was served a less-alcoholic, sweetened version intended for the gentler sex. Before we drank, our guide spilled a bit on the ground by the door in an ancient toast and said Pachamama, santa tierra (Earth mother, blessed ground). 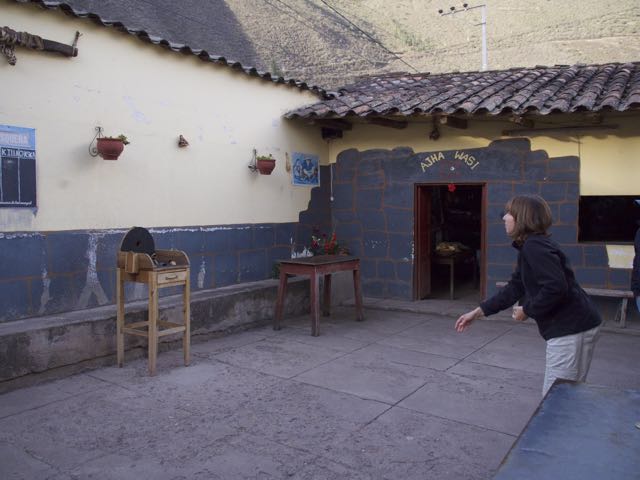 Just outside the door of the chicheria, there’s a game called Sapo (frog) that patrons play. It’s a coin toss game named for the brass frog that sits on the middle of the board, his mouth open hoping to eat some of the 8 coins tossed by each contestant. Whoever gets the lowest score has to pay for his friends’ drinks. 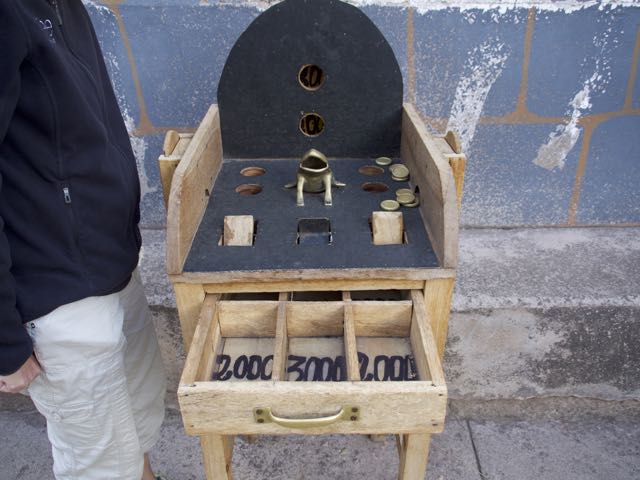 Our guide scored 7,000 points. Yvonne scored a whopping 25,000 points including a “sapo.” My score? Zero. L’oeuf. Nada. It was beyond humiliating. Then we went in to enjoy our chicha and I forgot all about it. Well, I had forgotten about it until now. I really could use a glass of chicha.