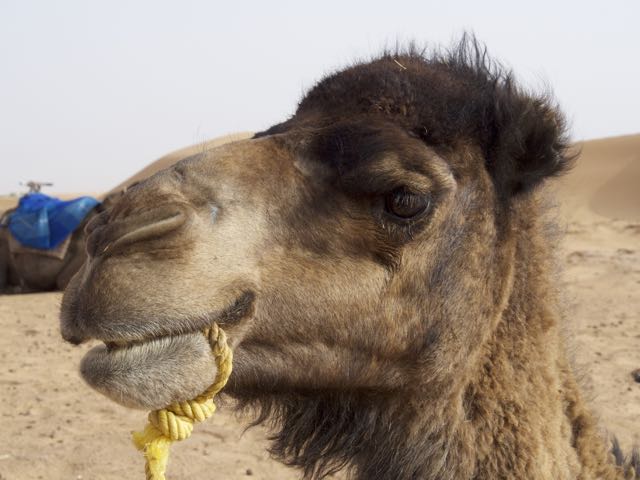 We spent most of a day driving through barren plains broken only by the occasional herd of goats and sheep, plus a visit to a fossil shop. We arrived late in the afternoon at a hotel in Merzouga, where we would begin our overnight camel trek into the Sahara Desert. Our tour guide, Ibrahim, said good night; a 4×4 drove us and another couple right to the edge of the dunes, where our camels were waiting.

As we pulled up, one camel was lying on the ground haphazardly, next to the others who rested proudly on their elbows. Head flat on the sand and legs sticking out randomly, he looked as if he had melted. He immediately perked up when we arrived. There was no real explanation of what to do or how to ride, and none was really necessary. Our desert guide, Ali, just had each of us climb on, our camels stood up, and off we went.

OK, I should stop right now to clarify something: We’ve heard stories about how uncomfortable it is to ride a camel. Sore butts and chafed legs are the primary memories when the tale is told. Well, maybe that’s all true. But what we have in Morocco are not technically camels; they are dromedaries. True camels, which are found in Egypt and the Middle East, have two humps, while dromedaries have one. And riding a dromedary is relaxing and enjoyable- we weren’t sore at all. Unlike the pounding of a horse’s gait, this is a gentle back-and-forth motion. If you’re a camel-hater, come to Morocco and try riding a dromedary! 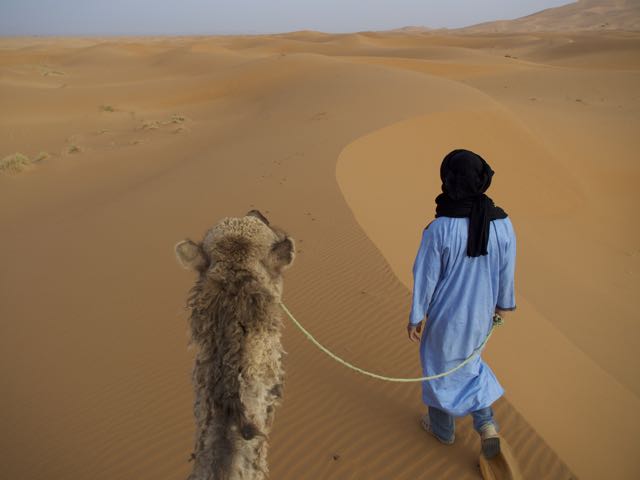 Ali was quiet as we walked. Too quiet for Yvonne. So she started talking to him, found that his Spanish was very adequate, and for the rest of the journey, they chatted away in Spanish. She asked him the names of our camels and was disappointed to find out that they had no names; only numbers which were printed on tags hanging off their ears. She decided to name her camel George, which Ali thought was pretty funny. I figured that since these guys were Moroccan, I would name mine Mohammed.

And they are all guys. If you mix male and female dromedaries, the males will get extremely aggressive with each other, while the females are not strong enough to carry passengers. So only males are used for transporting tourists.

At one point we stopped so that Ali could take pictures of us. He turned out to be a really good photographer with an excellent eye for light, framing pictures perfectly as the sun was setting. The other couple snapped the classic tourist photos of each other, one jumping in the air while the other catches them airborne. Of course, we had to do it too, and then Yvonne convinced Ali to jump for her camera. Very nomad-like. 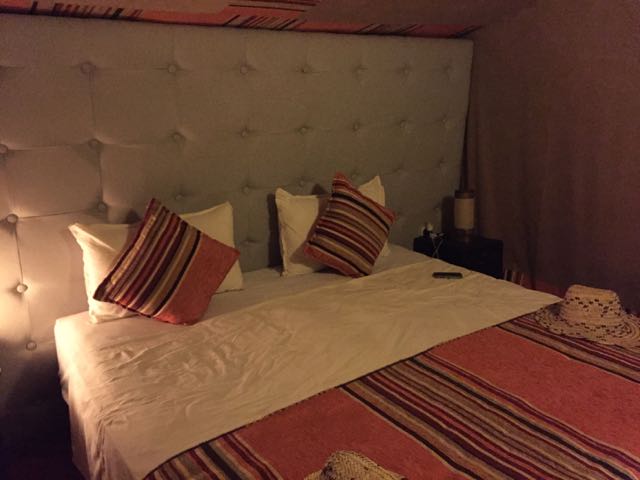 After about 90 minutes, we arrived at our camp. The tents looked exactly like traditional nomad tents… on the outside. Being the high rollers that we are, we had arranged to stay in a luxury tent fit for a sultan. On the inside, our tent was like a fine hotel room with a full ensuite bathroom and a queen-sized bed. Surprisingly, it rained for about 30 minutes! 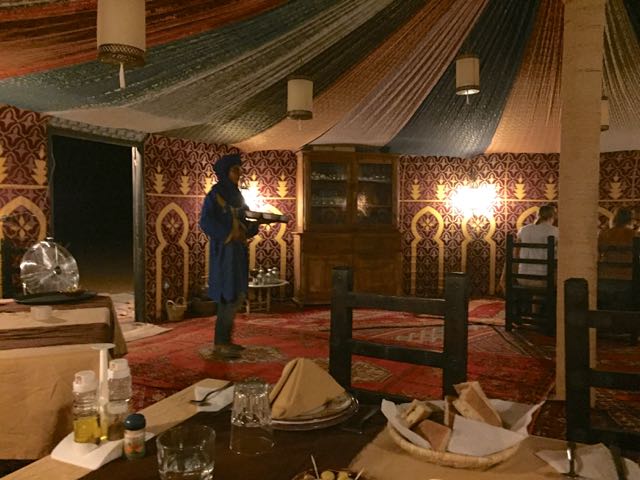 Dinner was served in a huge tent decorated with tapestries and lights. We joined a group of German visitors and the Chinese couple with whom we’d ridden in. Course after course was served and though we tried, it was impossible to eat even half of what we were given. Later, the staff sang and played traditional drums, and later the guests played the drums. We got to bed around midnight.

We were supposed to be awakened at about 4 AM so that we could hike up to the top of a nearby dune and watch the sun rise. Whether because the Ramadan-exhausted staff forgot, or because of some other reason, it didn’t happen. Some of the Germans were smart enough to set their alarms, and they did the hike on their own. Honestly, I was glad to have slept in until 6:30.

We had breakfast, then took off on our dromedaries for the trip back. By 8:30 AM, we were back at the hotel where we started, enjoying a relaxing time by the pool. Around 10 AM, just as we started to get a sense of how hot the desert was to become, Ibrahim picked us up for our trip into the mountains.

I will take one experience away from the desert: The constant sound of the wind, against the absolute silence of the dunes. The best time to be here is in October, and I would love to go out for a few days at that time of the year, moving to a different camp each night. One of the things I’ve learned about the nomads is that many refuse to change their lifestyle, even when they live most days at the edge of survival. Perhaps I’m being overly romantic but as the wind caressed the endless dunes, I think had a sense of why.