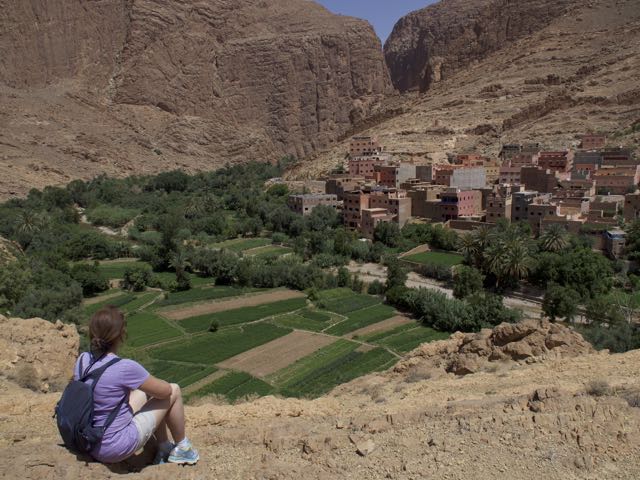 After we left Merzouga, we took a long, winding road through the mountains, where we were about to spend a week seeing some of the rural parts of Morocco. The road wasn’t just a long and winding one; it was the ONLY road. Outside of the major cities, there really aren’t a lot of highways, and nearly all of them are two lanes.

We spent a week in various villages and valleys, from Imilchil to the Todra Gorge, to the Dades Valley. We visited spectacular historic sites like Ait Ben Haddou where scenes from Gladiator and Game of Thrones were filmed.

We spent four nights at a spectacular inn at the Dades Valley, from which we could do some interesting day trips including a visit to the rock formation known as Monkey Fingers. But as always, what we will remember most is the people we met, and the many more people whom we saw going about their lives.

Nearly all the people who live in the mountains, whether nomads or villagers, are Berber, also known as Amazigh. I talked a bit about them in a previous post. Subsistence agriculture is pretty much all there is, along with a little tourism. In the barren hills, we passed herds of goats and sheep everywhere.

In the green river valleys and gorges, plots were planted with alfalfa, wheat, apples, apricots, dates, corn, zucchini, tomatoes- you name it, it was probably growing. 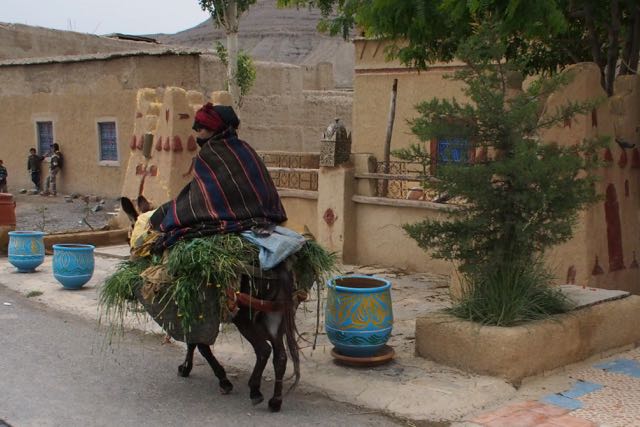 Donkeys are an ever-present beast of burden in these hills and valleys. Everywhere, the roads carry men and women leading donkeys piled high with wheat or produce. Sometimes, the beasts of burden are the women. The wheat will be dried in the village, then threshed and ground by a donkey turning a millstone, the same way it’s been done for centuries.

The village of Imilchil is in some ways at a cultural crossroads. It’s famous for its Wedding Festival in the late summer or fall. In recent years, the number of tourists visiting from around the world created a huge income opportunity and the town is full of partially-constructed inns. But the increase in tourism caused a backlash from some families who wanted to keep this important tradition private. So a couple of years ago, the decision was made to keep the date secret until the last moment.

This ended the tourism deluge, but also the tourism revenue. Those inns now sit unfinished, surrounded by construction debris. We’ve heard that Imilchil has decided to once again welcome tourists to the wedding festival. Like so many other places under pressure, they will have to figure out how to balance the need for development with maintaining the integrity of their cultural heritage.

Another sign of change: A woman in Imilchil complained to us that in the past, girls wanted two things when they married: A beautiful dress and a beautiful necklace. Now, they also expect their suitors to give them a big smart phone. Never mind that these girls don’t even know how to read. They just want to look fashionable, she said, as she dismissively imitated the girls dumbly swiping on their smart phones.

In the Todra Gorge, we learned that the nomads come down to the village to trade livestock or things they’ve made like rugs, for produce and wheat. Sometimes the nomads are so poor that they come with nothing to offer; they are given food anyway. One of the principles of Islam that we have heard about time and time again is to be kind to those in need, because it’s possible that next time, we will be the ones in need.

One afternoon we visited with a family of nomads who live in a set of four caves in the Dades Valley. One cave was for cooking and the walls were black with soot. Two were living and storage areas, and the fourth was within the walls of a pen, so their animals could take shelter from bad weather. The mother served us tea, while one daughter was weaving a rug. Another daughter worked outside and watched over her own sleeping toddler, while the men were all out tending their animals; we never met the men.

They have lived in those caves for nearly fifteen years, but it looked like they were camping. This family does relatively well, I think, because they welcome visitors: They survive on rug sales at a cooperative, trading of their livestock, and the added bonus of donations from visitors like us. But if things get too tough, they will leave and not look back. Even the loom looked rather crude and easy to pack.

The caves those nomads lived in seemed far more durable than the mud bricks used for centuries in the mountains and deserts, and still used today. Mud and straw are put in a mold, squeezed, and allowed to dry into hard adobe-like bricks that have excellent insulating properties. The problem is that when it rains, they quickly erode. A mud-brick building will literally become a pile of dirt in a few decades if it isn’t constantly maintained. We drove out of Imilchil as a deluge of rain began, torrents of water rushing down the dirt paths toward the road we were on. Many of the older homes there are mud brick, and I can’t imagine how hard life must be for the people who occupy them. 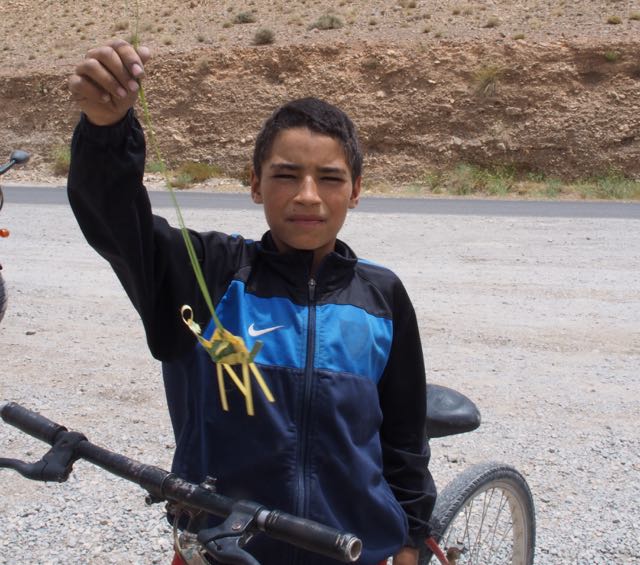 Children always waved as we drove by, but if we stopped they’d often want something, unfortunately– sometimes candy, sometimes money. We were very taken with one young man who, in the middle of nowhere at a scenic overlook, came over to sell us a camel that he’d woven himself out of palm fronds. We had to buy one, to reward his willingness to create something of value rather than beg.

We took a walk one afternoon and passed a young girl on her way to school:
Us: Salaam!
Girl: Dirham? (the Moroccan currency)
Us: La. (no)
Girl: Stylo? (the French word for a pen)

Yvonne found one in her bag and gave it to her. She looked it over approvingly, said saha (the Tamazight word for “thank you” as opposed to the Arabic shokran) and ran off to catch up to her friends.

Villagers send their children to school, but nomads sometimes don’t. In Todra Gorge, we were told that most children are sent to live in the village for ten months out of the year, where they will attend school. The oldest son might be kept back to help his father with the animals. In some places, the government is providing vans or buses to transport children so that they can attend school every day.

But this isn’t always the case. We spent some time talking to the owner of our tour company, who lives in the Dades Valley. We learned about his charitable work to try to help improve the lives of the nomads as well as the villagers. He said that no matter how much he tries to sell some nomad fathers on the value of education– or other improvements they could make in their children’s lives– they will nod, smile, and do nothing about it.

Those fathers might relent if they have a lot of children and can’t provide for them all; then the “extras” will be sent to live with a relative in the village and attend school. They probably won’t send their daughters because they just don’t see the value in a girl getting educated. Giving up the way they and their ancestors have always done things means giving up their freedom, and for a nomad, freedom is everything.