Jimi Hendrix, Where Art Thou? 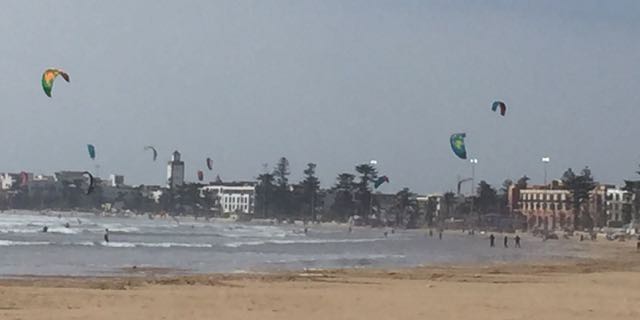 It was so windy in Essaouira the evening we arrived that my hat flew off of my head as I exited the car. That much wind was exceptional, but it isn’t called the Windy City for nothing; this coastal town and its tradewinds are world-reknowned for kitesurfing. The typical weather during our visit was cool and overcast in the morning, even foggy sometimes, while afternoons were sunny and breezy. It was much more like San Francisco than hot Casablanca, which is 200 miles north.

The first night, we had dinner at our beautiful riad and it was magnificent. We were the only diners. We sat by the fireplace facing into the courtyard, with jazz playing in the background and candles on the table. We were brought multiple courses of delicious Moroccan food. But no chicken, thankfully; I am so sick of chicken tagine with olives and preserved lemon. 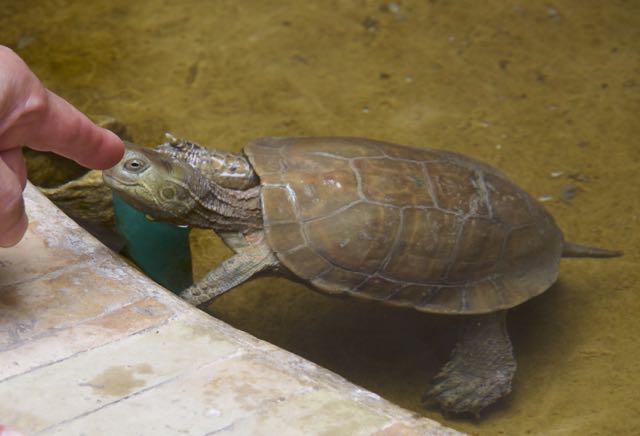 There is a large turtle living in that courtyard who is more resident than pet, wandering at will: Sometimes in the ground-level fountain, sometimes among the potted plants or in the sun.

In my opinion, the things that make Essaouira unique aside from its climate can be found in three places: The two-mile long, clean, sandy beach where kitesurfing rules the waves; the port, where fisherman sell their catch to locals, restaurants, and wholesalers from as far away as Marrakesh; and its art and music scene.

Essaouira is a haven for the arts, especially woodworking, painting, raffia crafts, and music. Legends abound of Jimi Hendrix’s time in Morocco and almost none of them are true. Jimi’s companion in Morocco, Deering Howe, wrote, “Like George Washington, he slept in everyone’s house.” Nonetheless, Jimi and lots of other famous musicians did visit Essaouira, including Maria Callas, Cat Stevens, and The Rolling Stones. Bob Marley and the Wailers performed at the Gnaoua Music Festival in 2004 (more on Gnaoua below).

Many of the inlaid wooden boxes, bowls and tables which are found all over Morocco are made here, and in every back alley you can find someone who works with wood. We discovered one tiny workshop owned by a man named Mohammed. We didn’t see any other work that looked like his– he inlays thin strips of aluminum into the wood, and uses red and green dyes to add color to his designs. Indeed, when we later saw similar designs for sale at a cooperative, it turned out that it was his work.

Gnaoua is a West-African inspired, but uniquely Moroccan, musical style of hypnotic percussion and vocals. And Essaouira is the Gnaoua music capital of the world. Every summer, this small town has a 4-day Gnaoua music festival that attracts hundreds of thousands of people, completely overrunning itself with musicians, hippies and tourists. Gnaoua infuses all of the music here, including jazz and rock.

One evening, we enjoyed a fantastic evening of music and good seafood at a quirky restaurant called Café Caravane. The musicians started out playing Andalucian music on guitar, mandolin, and violin. Later, they put down their string instruments and picked up drums, pounding a powerful rhythm. Our waiter joined them, leading call-and-response vocals and dancing. The video is too dark to see, so here’s how they sounded. Listen for a little while and see if it starts to get inside you:

The port of Essaouira is an experience unto itself. Dozens of fisherman line the long wharf, selling their catch of sardines, mackerel, rays, various eels, shrimp, roughy, the occasional crab or lobster, and so much more.

The place reeked of fish, and that’s part of the fun. The mongers are constantly cleaning fish or huge squid for customers, and the remains just go on the pavement for the seagulls and cats to pick at later. We also noticed that certain customers would throw unsatisfactory sardines on the ground rather than put them back where they came from. After a while, the odors fade into the background. 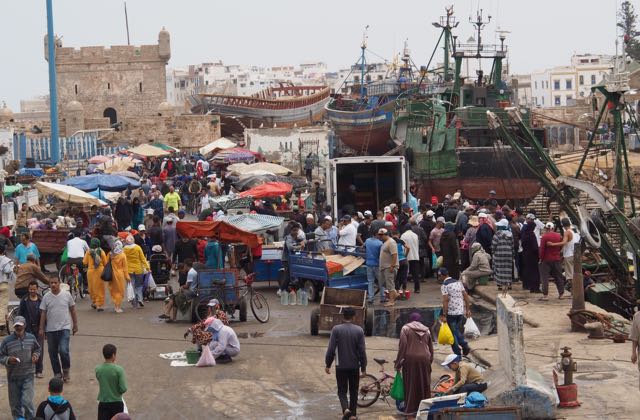 What’s actually being sold is ridiculously fresh. I saw a shrimp jump out of its basket, making a courageous dash for freedom. Sadly for the shrimp, I picked it up and put it back. I think it looked devastated but honestly, it was hard to discern the expression on his little face. 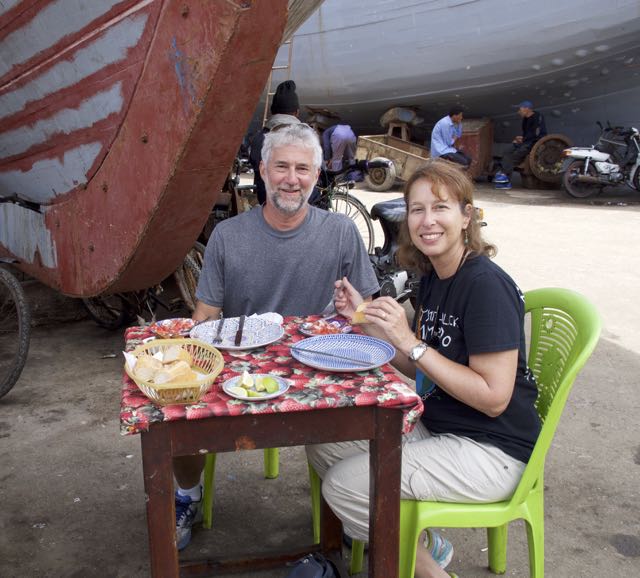 We ate lunch there, sitting at a plastic table so close to a fishing boat in dry dock that I had to move my chair to keep from bumping my head. You can bargain for your own fish along the pier and have this place cook it for a small fee like I did in Casablanca, or you can just pay for your meal in full. We chose the latter, and enjoyed delicious grilled sole and calamari.

Every medina has its own personality. This one has a more open feel than other medinas we visited. Essaouira, along with its port, was designed in the mid-18th century by city planners and architects who were commissioned by Sultan Mohammed III.

Essaouira means “beautifully designed.” Though most motor vehicles aren’t allowed, you could literally drive a truck down the main street. And at night, the medina comes alive, at least during Ramadan. Shops selling everything from baked goods to scarves were still open when we left the restaurant at midnight.

The wide streets lent themselves to crowds of people strolling, and they were packed. Not only with adults—lots of young children walked with, or were carried by, their parents, but I heard none of the tired cries that we’d expect in the U.S. They must nap a lot during the day.

The vendors are somewhat more laid back in Essaouira. “Come take a look!” has become the signal for us to run away as fast as we can. But in the woodworking cooperative, we wandered for 30 minutes and no one said anything! Similarly, we passed a spice shop run by a young man who was so laid-back and kind that we finally felt comfortable buying spices. And buy, we did– saffron, menthol crystals, tea, and spice rubs for meat and fish.

Wandering around the medina on our last day, we met a man working at a visual arts cooperative that sells [really nice] paintings by women and disabled teen girls. Yvonne engaged him in conversation and he had a lot to say—about income inequality, about the lack of prioritization of the poor in local government policies. It turned out that he volunteered at the cooperative, and his real job is managing development projects for NGOs. He talked about his daughter who went to high school for a year in the U.S., and now relishes opportunities to practice her English.
Eventually, he asked us to join his family for ftour that evening. In my post about Ramadan, I mentioned that we had been invited to various homes to share the sunset “breakfast,” but that our scheduling constraints prevented it. This time we gratefully accepted his offer.

That evening, we sat in the dining room of his home with him and his family, while his wife cooked endlessly in the kitchen, occasionally joining us to chat. Food came out incessantly: Harira, shbekia, dates, bread, fruit, fried fish, tagine, orange juice, tea, stuffed english muffins. His daughter was a pleasure to talk with and called her “American mother” in the U.S. to introduce us. His teen son loves to box, and has a black belt in one of the martial arts.

After our host brought us back to our riad, we thanked him for honoring us with his invitation. He thanked us in return for accepting. He told us that the Quoran says: Inviting a guest to share ftour is better in God’s eyes than going to the mosque to pray.