As we headed out of our hotel in Siem Reap, Cambodia, young hotel staffers near the door greeted us with wide smiles and folded palms. I’m sure it was required of them, but over time we found that their warmth and friendliness were very genuine. Buddhism’s call for kindness to others is part of Cambodia’s culture and there was a gentleness to many of the people we met during our time in Cambodia. 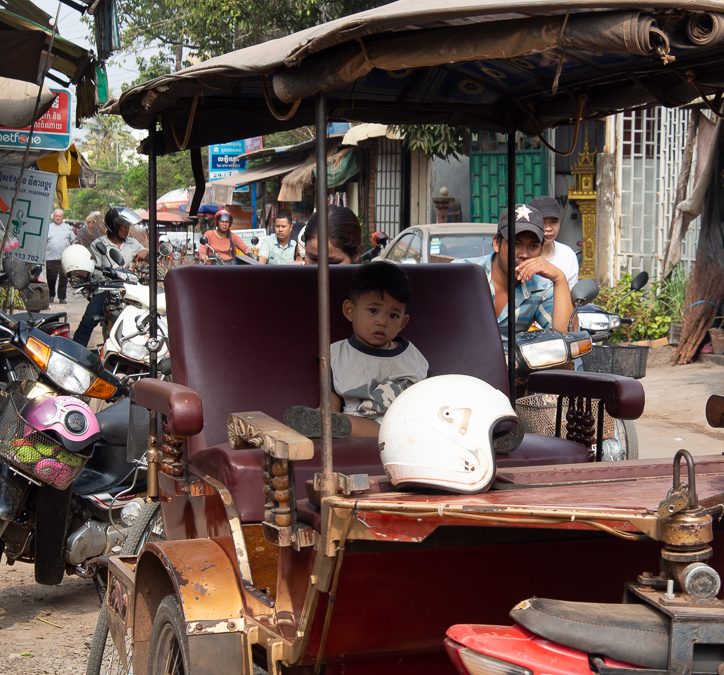 Outside, several tuk-tuks offered us rides. We declined, preferring to walk the short distance to the tourist market area, where there were hundreds of shops all selling basically the same stuff: cheap jewelry, clothing, and leather goods. High-quality, gray-market Nike and Under Armor shirts can be had for $5 if you’re willing to negotiate. 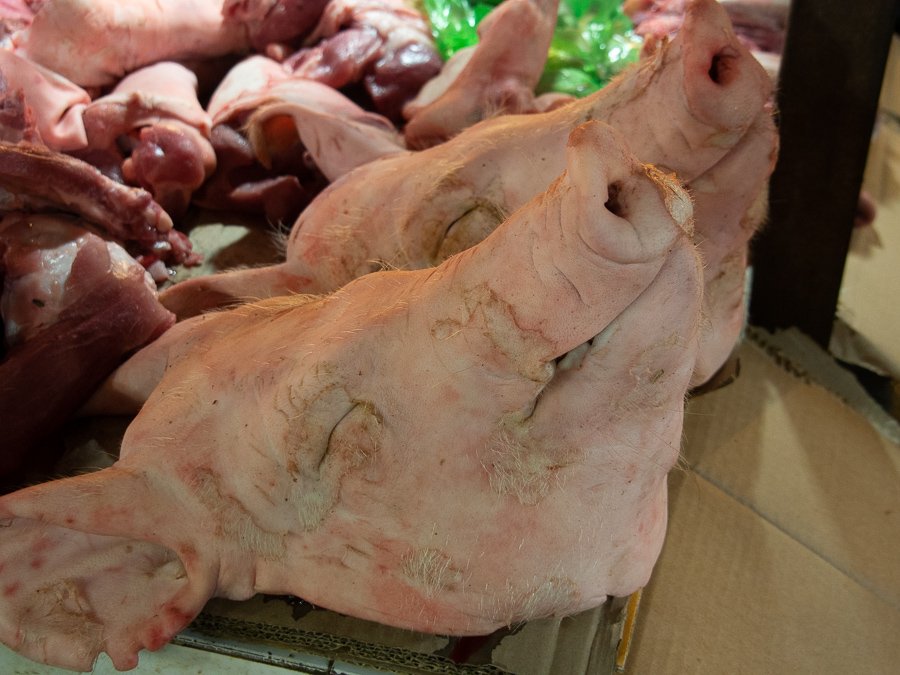 There was also a huge food market, where locals bought flowers, herbs, live seafood, dead chickens, and pig heads. Row upon row of vendors sold hot foods—skewered shrimp, noodles, and grilled pork. They hawked their dishes to anyone who walked by, but I only saw locals eating. 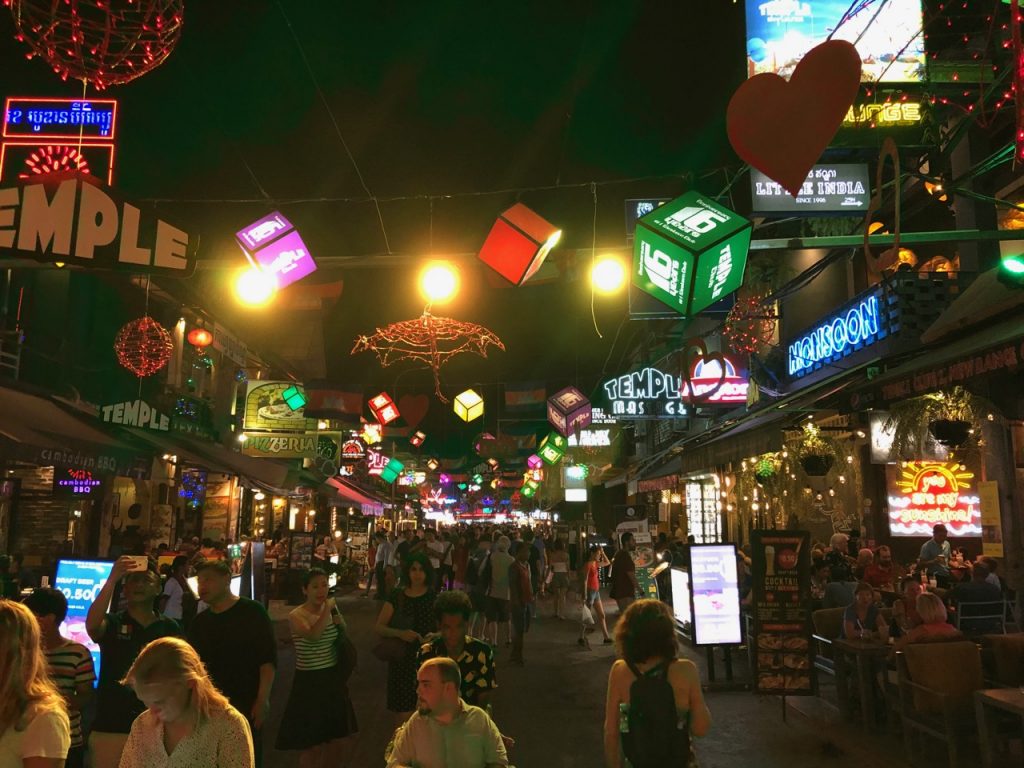 The markets border Pub Street, a two-block long center of nightlife in Siem Reap. It was busy during the day but at night it was completely crazy there. Thousands of tourists packed the bars. Restaurants sold beer, burgers, and pizza along with a few Cambodian specialties. Western pop music, both recorded and live, blared into the streets. Vendors wandered through the crowds selling roasted scorpions and tarantulas on bamboo skewers. Prepared properly, they might have been Cambodian delicacies (I was told), but only laughing tourists on a dare ate those charred and blackened excuses for food. A number of storefronts offered ridiculously inexpensive foot massages and mani-pedis. Pub Street is one big party, every night.

But this was mid-afternoon, and Yvonne and I were out for our first exploration of Siem Reap, having only arrived the evening before. It was hot—about 90 degrees F—but we were happy to be walking after our 26-hour journey. We hadn’t walked far when traffic came to a complete stop. But no one was honking their horns. Engines were turned off. Something was up; we had no idea what. 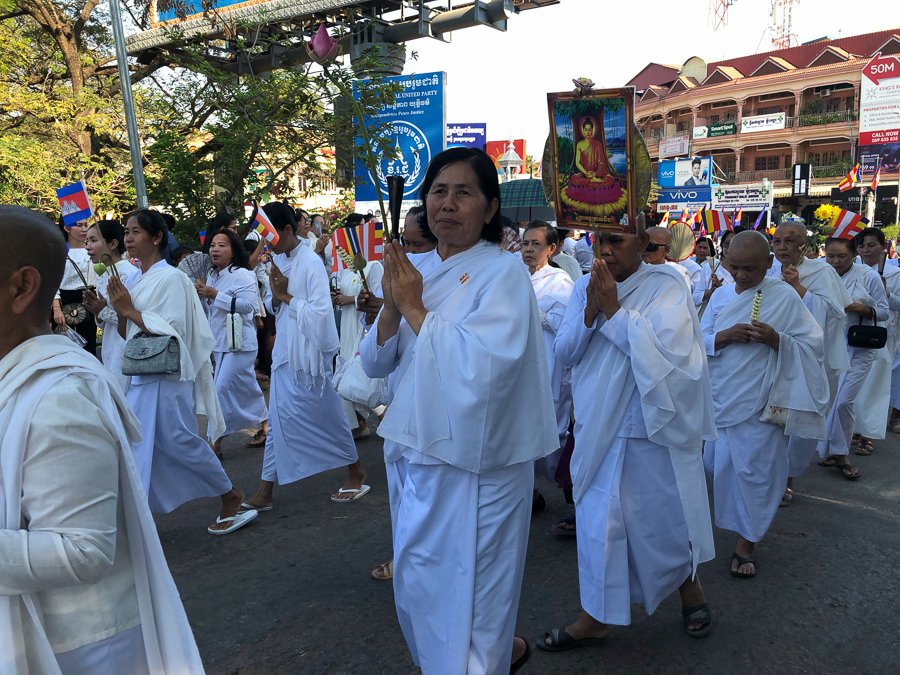 As we approached a bridge that crosses the small river which bisects the town, we saw hundreds of people marching, many with folded palms. There was a golden parade float mounted on a flatbed truck, with men and women dressed in white and gold, gorgeous costumes that reminded me of those worn by Apsara dancers in Cambodia and Thailand. Right behind them was a traditional band playing music on percussion and strings.

A woman walked by carrying two flowers; she handed me one as she passed. I held it as a herd of tuk tuks slowly drove along with their well-dressed passengers. Hundreds of monks in orange robes chanted as they walked, each of them carrying the international flag of Buddhism.Large groups of uniformed schoolchildren marched by, singing.

I thought I could see the end of the parade at the far end of the road. I was wrong. We stood on the bridge as thousands of people marched by, heading to a temple somewhere across the bridge. We were in no hurry, because nothing makes us happier when we’re traveling than unexpectedly running into local festivals or cultural events. Today happened to be Buddha Day, known as Meak Bochea in Cambodia.

Buddha Day is celebrated worldwide, but every Buddhist culture has their own version of it. It commemorates the day, perhaps 2,500 years ago, on which it’s believed that Buddha gave his last sermon, during which he summarized the heart of his teachings and also predicted the day of his death. It’s also a day of penance, when one prays for forgiveness for the transgressions of the previous year. Schools and government offices are closed so that people can attend events. 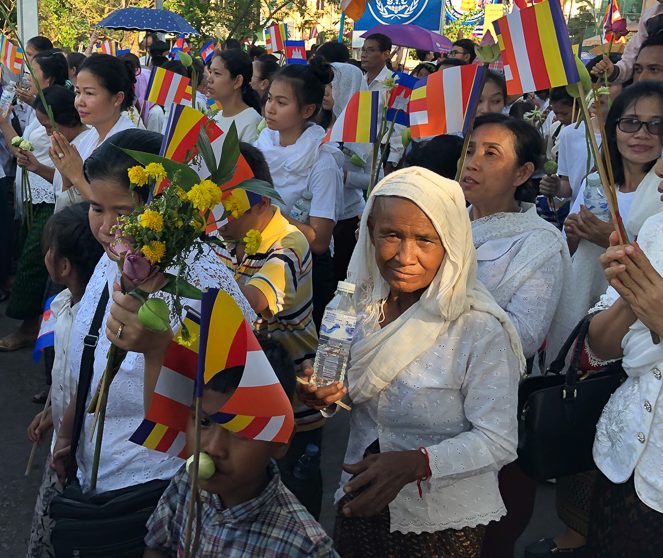 After about an hour, we were ready to move on but the parade continued. An old woman passed us and I handed her my flower. Her face lit up with a smile as she kept walking. We drifted back the way we’d come, back to our hotel.

Pub Street would have to wait.

PrevPreviousMoroccan and a Half
NextI Can See Russia From My Veranda!Next