I am not really a cruise vacation sort of person. I prefer to spend enough time in foreign ports to get a feel for places, to experience life there even if I’m not actually living the way the locals live. But the cruise I’m on right now is really, really good and I can finally appreciate why some people make cruising their first choice for travel. Of course, it depends on the ship. 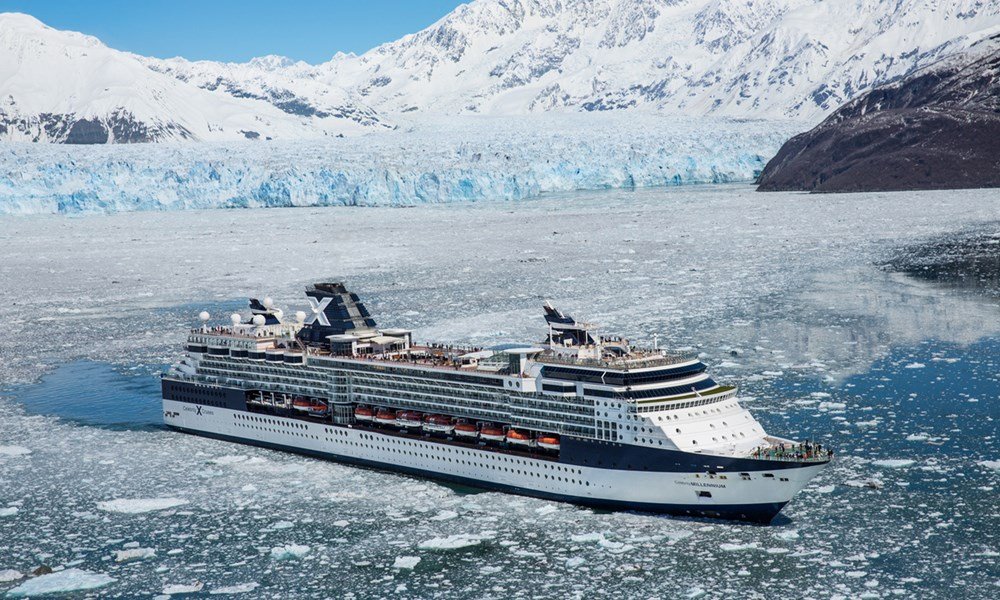 Yvonne and I have been living on the Crystal Symphony for just about two weeks with Yvonne’s father, her brother, and his wife, on a 21-day cruise. We boarded in Tokyo, cruised up to Kamchatka, along the Aleutian Islands, and now down the North American coast back to San Francisco. At this moment we are cruising the North Pacific, south from Kodiak Island, Alaska.

There’s something very comfortable about this ship. Maybe it’s because although it can carry over 800 passengers, we only number 650 and it never feels crowded. Or because our cabin is spacious and we have a veranda with two chairs, not just a window. It might be because the staff is friendly and ever-attentive. Many staffers have been here for years, even decades. Some passengers have been on board almost as long—one was celebrated last night for her 130th Crystal cruise—and that consistency on both sides seems to generate a sense of family.

The food is not just plentiful and omnipresent, but delicious and varied. Alcohol is included, so whether or not I choose to have a cocktail or a glass of water, I don’t have to think about the cost.

After twelve days, we are settling into the rhythm of the trip: finding a comfortable corner in one of the lounges for reading or writing during days at sea; afternoon games of mah jong with fellow passengers; the excellent fitness center; and great entertainment in the evening.

But the thing with any cruise is that regardless of the ports you visit, you can’t immerse yourself anywhere other than on the ship. In town for a few hours, then out again. Still, we’ve had the chance to have some cool, if short, experiences in new places.

The other day Yvonne and I visited a museum in Dutch Harbor where we learned about the unpublicized but horrendous forced relocation of native Aleut people during World War II. Hundreds of people, mostly children and elders, died due to lack of food and proper shelter after they were forced from their villages by the U.S. Navy, sometimes with only the clothes on their backs. Supposedly it was for their protection from Japanese bombs, but only Aleut people were required to leave, even if they were married to white people. We spent some time talking with a young woman at the museum who had a traditional tatoo on her face—a thin patterned ribbon horizontally across her cheeks—who is learning the local language, which was almost completely lost.

Yesterday we took a small fishing boat into the beautiful waters around Kodiak Island to view sea otters, sea lions, puffins and humpback whales up close for a few hours. We met a couple this morning who arranged a plane for themselves and flew to the Kodiac National Wildlife Refuge, where they saw wild Kodiac bears (they are bigger than grizzlies) and spectacular scenery.

One port wasn’t so beautiful. Petropavlosk, on the tip of the Kamchatka peninsula in Russia, is truly an armpit of a city. Cold, wet, and featuring ugly Soviet-era cement block architecture, the weather is nearly always miserable. We took a tour, and even our tour guide told us she wants to leave. We visited an indoor shopping center including a fish market, which sold fresh salmon and a ton of smoked fish and caviar, the odor of it all wafting over us in fishy waves when the automatic doors opened. Outside, a small, covered produce market featured potatoes and root vegetables sold by sturdy women who all smoked cigarettes.

No need to immerse myself in that place, though the Russian Orthodox church was quite nice.
By the time you read this, we’ll have gone to Hubbard Glacier which, if I understand correctly, is one of only two glaciers in the world that are still growing. After that we’ll be hiking in the temperate rainforest outside of Skagway and kayaking on a scenic bay in Sitka. I see this cruise partly as a way to see Alaska and decide which places will earn a longer visit later, but mostly as a way to spend time with Yvonne’s father, who will soon be 95 years old.

Last night, it never got dark. The sun set in a clear sky at about 10:45 PM and at midnight the horizon still glowed fiery red and orange. At 1:30 AM it was still light and the sun rose this morning at 5-something.

I suppose that in a way, this cruise is a foreign land for me. I don’t live and eat the way I am used to. But I have been on board long enough to adjust to how life is lived here. I’m having an immersive cultural experience of sorts right here on the ship.