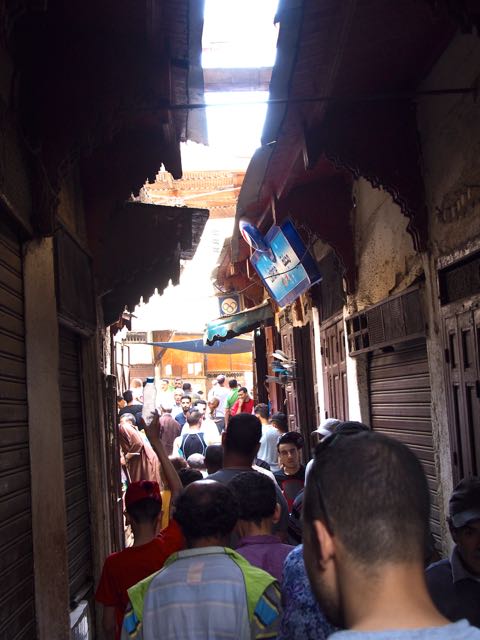 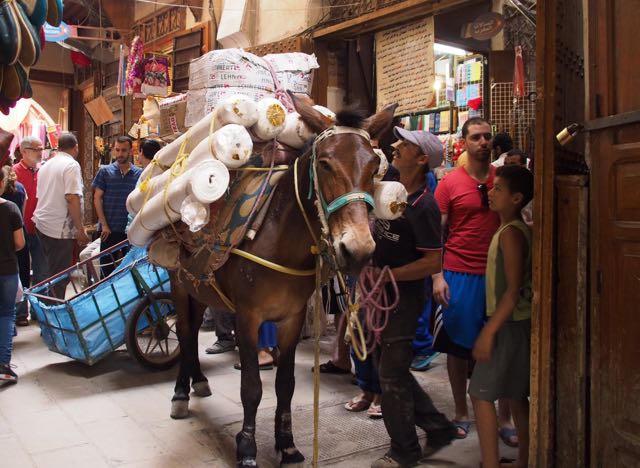 There are no automobiles within the medina. When we arrived, a porter met us at our taxi with a big cart, filled it to the brim with our excessive luggage, and then pushed it on the ten-minute walk to our riad (an old mansion converted to an inn).

In each of the cities where Yvonne worked, we stayed at least a week. I had the luxury of settling in, getting oriented, and then setting out to explore. But we only had 2 full days in Fez and time was of the essence, so we took a walking tour with a guide. Hamido was born in the medina. Now 64 years old and in less than stellar health, he could have passed for close to 80. Many of the older shopkeepers—and many of the children—greeted him fondly as we walked and explored the ancient streets.

Yes, there are a ton of tourist shops and many of the vendors are annoyingly agressive. But Fez thrived for over a thousand years before the tourists showed up. The pottery, leather goods and brass trays are mostly still hand-made by some of the best artisans in Morocco, often practicing their crafts with the same tools and techniques used when Fez was an important stop on the spice routes between Africa, Europe, and the Far East. In Marrakesh, the craftsmen were pushed to the outskirts of the medina to make room for more shops; here, they are still part of the heart of the old city. 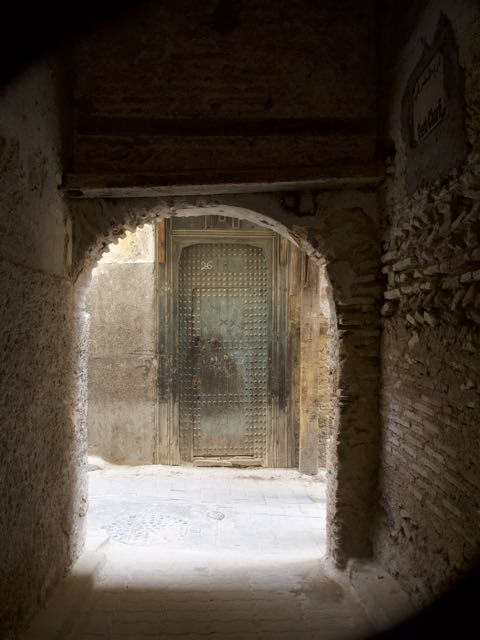 Winding alleys spur off the main roads, and even more narrow alleys from those, sometimes barely wide enough for a man to walk. This was by design: Defense is easier if a horse can’t fit and soldiers have to walk single file. The sky nearly disappears behind the high, drab walls of buildings that lean in threateningly, held back only by lattices of ancient timber stretched between them.

Hamido gave names to some of the streets that had no official names of their own: Pink Floyd Street referred to “The Wall” that towered above us in an impossibly narrow alley; Danny DeVito Street was another alley, basically a tunnel, that he claimed appeared in Jewel of the Nile (it didn’t). But not only the streets are ancient.

We peeked into the courtyard of the University of Al Quaraouiyine, the oldest operating university in the world, founded in 859 AD. People came here from all over the Mediterranean to study advanced mathematics and astronomy.

The famous Jewish scholar Maimonides taught philosophy here in the 12th century and lived nearby; the door to his home is marked with a plaque. The mosque attached to the university was the largest in Africa until the completion of the Mosque of Hassan II in Casablanca. 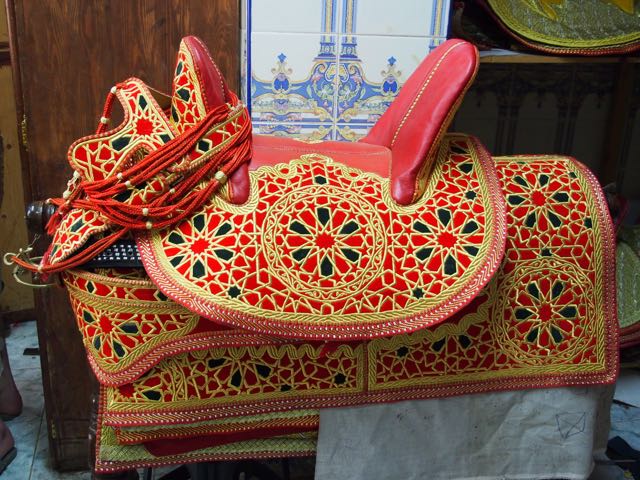 We also stopped in the small, unassuming shop of a man who makes saddles for horses– the horses of Morroco’s King Mohammed VI. He displays the duplicate of a saddle he made which was presented by the king to U.S. president George H. W. Bush as a gift. It was comprised of 17 separate hand-embroidered pieces and took about a year to complete. He began his career making leather slippers.

The last of our 3 days in the area will be spent at the Roman ruins of Volubilis and in the town of Meknes. In the short time Yvonne and I had to see Fez, there was almost no time to explore on our own, and I remembered what it feels like to be a normal tourist: Rushed. But we will soon head out to spend 11 days in the mountains, among villages and nomads.