The last of my articles about cool things to see and do in Morocco has finally been published by Journey Beyond Travel!

I just had an essay published in a beautiful online magazine called Hidden Compass! I’m thrilled to sit in the company of some really great writers. Click on the link below and scroll down to find and read my essay called “Moroccan and a Half” but afterward, read the other pieces too!
http://hiddencompass.net

A Visit To The Royal Artisan School

Want to learn about how Moroccan craftsmen and artisans do their incredible work? Take a tour of the only school that teaches it!
https://www.journeybeyondtravel.com/blog/tetouans-best-kept-secret-royal-artisan-school-green-olive-arts.html

Oh look, another one of my articles about Morocco is published on Journey Beyond Travel!

Here’s another article I wrote for Journey Beyond Travel!

I’ve got another post up on Journey Beyond Travel. Read it here!

Few things for me are more full of short-term pain and long-term pleasure than spending too much money to buy something I didn’t want. Because almost always, once I’ve finished smacking myself on the forehead for being so stupid, I realize that along with the purchase comes a good story at no extra charge. And then, the unwanted thing becomes a cherished memento. So it was that one morning in Essaouira, I was sucked into a nomad’s trinket shop.

My shopping list for this visit to Morocco was very short: a pair of earrings for my wife, and argan oil. I’d already bought the earrings in Marrakesh and I knew where to get argan oil, so I was taking a carefree walk down a bright, gallery-filled street in Essaouira called Rue Ibn Rochd, taking pleasure in window shopping.

“Come into my shop and have a look around!”

“I’m not buying, I did all of my shopping last year.”

“No problem, just have a look anyway!” 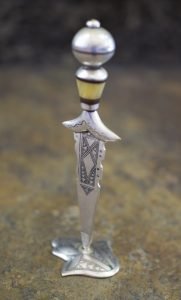 He did have some nice things, not just the usual tribal jewelry and Hands of Fatima. My eye fell first on an engraved, silver letter opener, and then on an antique-looking bronze globe, about 6″ in diameter and set into a 4-legged bronze stand where it could spin freely. The globe and stand were covered with innumerable etchings of faces, animals, Arabic letters, flowers, and constellations. It was gorgeous.

He pointed out another globe, similar in style and beauty but smaller, in a classic upright globe stand. Another man, who looked like Eddie Murphy in a blue robe and turban, pulled it out from the glass display case and set it down on a low table in front of me.

“Have a seat, I’ll make you some mint tea,” the first man cooed. “Do you like sugar?”

Reluctantly, I sat. He introduced himself as Abdullah, and the Eddie Murphy look-alike was his friend Mohammed. They came from desert nomad families and Abdullah’s owned the shop. In a few months, they’d be replaced by brothers or cousins, and go home to their wives and children. Periodically, the cycle repeats. At least that’s what they told me.

Despite my best intentions, I found myself asking Abdullah what he wanted for the globe. “7,000 dirham,” he answered. About $750. “I take Visa, it’s no problem!” There was no way I was going to pay that much for it. I didn’t even want it. But as soon as I asked the price, he knew he’d hooked me. And like the best fishermen, he knew how to play out his line, reeling me in so slowly that I didn’t notice.

The globe was very old, he claimed, made by Berbers long ago. His family had traded other things to acquire it and there was nothing else like it in Morocco. He asked me to make him an offer; I shrewdly suggested 500 dh. He laughed like Geoffrey Holder in the old “Uncola” commercials and replied, “If I took 500 for it, my papa would chain me down in the desert without food for a month!” I told him that if I paid him 7,000 dh, my wife would chain me down in the desert. He put the globe back into the glass case.

We talked for a while about our lives. From time to time, as Mohammed poured us more tea or went outside to smoke, Abdullah pulled out boxes of bracelets or rings to show me; I had no interest. He said, “big shop, small price!” which I’ve heard a lot in Morocco. He told me that Americans have big hearts. “Big hearts, small wallets!” I parried. He had some cups carved from gourds that reminded me of the coconut bras you find in Hawaii, and we had a good time joking about those.

A few minutes later he put the globe in front of me again. How much was I really willing to pay? he asked. As I reluctantly offered 1,000 dh, I understood what he’d known for some time: my wallet was soon going to be even smaller. In Moroccan bargaining style, he took out a piece of paper, wrote his price on the top, then crossed it out. He wrote my offer at the bottom, then crossed that out.

He laughed that glorious laugh again.” If I let you have it for 2,000, my papa would make me wear those cups and dance for him!” I told him that I thought he’d look very beautiful that way, which elicited an even bigger laugh. We definitely enjoyed each others’ sense of humor. He crossed out my 2nd offer. I was doomed.

In the end, we settled on 4,000 dh cash, on the condition that it wasn’t for resale, and that I wouldn’t tell anyone how “little” I’d paid. Because, you know, it was such a steal. I agreed, if he would throw in that beautiful silver letter opener I’d also had my eye on. He resisted, but finally said yes. I drove a hard bargain. 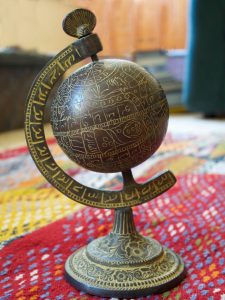 I admire that globe almost every day. I have no idea what it’s really worth or how old it is; I haven’t been able to find anything remotely like it online.

Since someone is sure to ask: no, Yvonne didn’t give me a hard time for buying it. After all, it came with a great story about Abdullah, Mohammed, and their masterful salesmanship.

Eat, Pray, Love In Morocco: An Evening at Khadija’s Kuzina

Here’s an article I wrote for Journey Beyond Travel, about one of two cooking classes I took in Essaouira, Morocco last month!

Eat, Pray, Love in Morocco – An Evening at Khadija’s Kuzina

A Guided Tour of Chefchaouen, Morocco

The first of a series of articles I’m writing for a Moroccan tour company called Journey Beyond Travel has been published! Here’s the link:

A Guided Tour of The Blue City – Chefchaouen, Morocco

It’s strange, coming back to a place that is so familiar while still being so foreign. I arrived in Tangier last night after an adventurous day traveling from Granada, Spain. Getting oriented in Morocco was easy the second time around. Getting here was not. …