Barhopping In The Grenadines 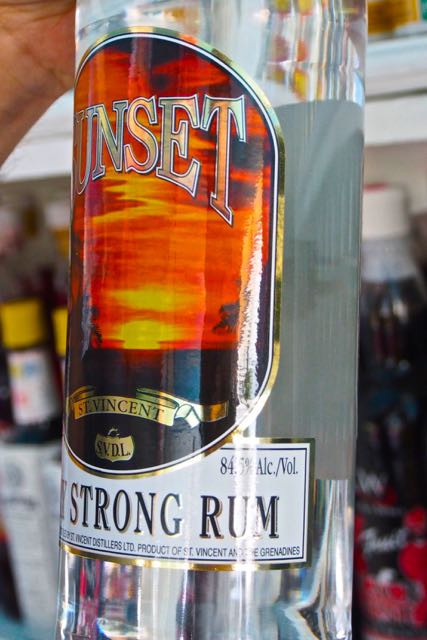 In St. Vincent and the Grenadines, nearly every beach has a broken-down little shack on it selling cheap rum, beer, and cocktails. A single sparsely-covered shelf on the back wall displays a few bottles. There’s usually one customer, a friend of the proprietor, perched on a barstool planted in the sand. They talk for a couple of hours in Creole until lunch, when the palm trees behind the shack no longer provide shade. The owner ducks under his counter, closes up the plywood shutter doors, and the two of them take off. A couple of hours later, the bar reopens and another friend visits until it shuts down for the night, just when a tourist like me might be looking for a drink. 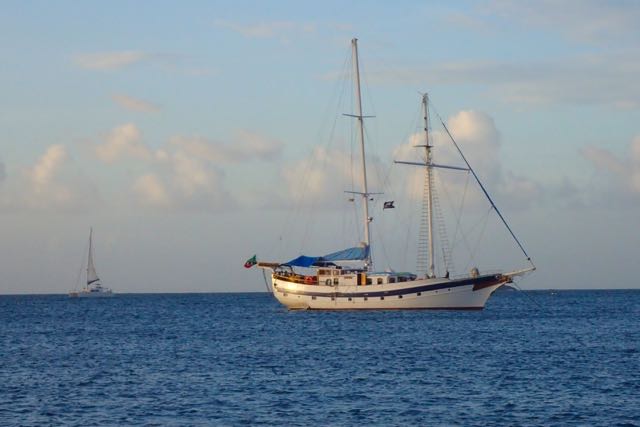 We were sailing for twelve days in the Caribbean’s Windward Islands on the Diamant, a 101′ schooner run by Island Windjammers. Although the ship takes up to ten passengers, we were only four, served by a crew of five.

Aside from Yvonne and me, there was Nancy, a sensible, seventy-something widow who rarely left the ship in the evening, preferring to read and go to bed early; and Mike, a fifty-something bachelor IT manager who unintentionally provided me with a rare pleasure: My 5′ 6″ frame was several inches taller than his. He was only slightly annoyed when I shared my excitement about getting to be “Big Mike” for the first time in my life.

Though there’s not much nightlife on Mayreau Island, we set out to find it. After having our dinner aboard ship, Captain Stuart, Little Mike, Yvonne and I tendered to the dock. The dark waterfront was deserted except for a small group of women chattering together and a young couple exchanging long, romantic looks. From the dock, a friendly dog followed us as we hiked across a muddy field and then up about a half-mile on the steep paved road that wound its way to the peak of the island.

Earlier that day, we’d hiked all the way up to visit a small church with a spectacular view over the Caribbean and several other islands, and we’d dropped off donated supplies at the local school nearby.

With flashlights to guide us now on the unlit road, we passed dozens of wooden or concrete-block homes with darkened windows; only gregarious laughter, the sound of a TV, or the cry of a baby gave any clue of occupancy. Although daytime saw at least a dozen bars scattered along the way, only two were still open.

Robert Righteous and Da Youths Seafood Restaurant and Bar was a ramshackle, clapboard building painted in red, yellow and green. A big wraparound porch, festooned in draped fishing nets, floats, and bottles, served as the entrance. It was topped with a sailboat and looked as if it had been frozen in mid-collapse. Inside, the walls and exposed roof were wallpapered with decades of donated decor from the thousands of tourists who came before: license plates, postcards, photos, currency, posters, shirts, and street signs. It was open-air, the full-height windows protected only by the fish nets on the porch. The only other patrons while we were there were a young couple from Switzerland.

Robert himself was fifty-something, thinly built with a grey beard, his hair stuffed into a knit rasta hat. He may or may not have been sober; his speech was slightly slurred and his eyes had the glazed and watery look of a man who’d spent too many years marinating in rum. We ordered drinks from the young woman tending bar and while we waited, Stuart and Robert exchanged news and stories.

About a half hour into our visit, Robert brought out a variety of percussion instruments. Stuart, Yvonne and I grabbed shakers, sticks and bongos (Little Mike preferred to nurse his drink and listen). Robert’s son took the conga and began a fast, syncopated rhythm while the rest of us clacked or drummed along. Robert began to chant: We GOOOOO, we go we go we go we go! RUUUUNNNN, run run run run run run run!

Then came some unintelligible lyrics which were slurred into the heady percussion. But the words didn’t matter. Yvonne and I love south-of-the-border rhythms. At home, you might even catch us drumming away to some Cuban or African number in our car, slapping on the steering wheel and each others’ knees as we drive down the road. We were DOWN with it!

After we refilled our pina coladas, Robert named the next song and his son started on the congas again. Robert began to chant: We GOOOOO, we go we go we go we go! RUUUUNNNN, run run run… if the songs were any different, we couldn’t tell. We were in heaven anyway. We all encouraged the Swiss couple to try some drumming and after much prodding, they did. The wife was pretty good but the husband couldn’t keep a beat to save his life and soon enough, Yvonne and I were back in the band.

Eventually we said good night, walked partway back down the hill, and visited Dennis’s Hideaway. Compared to Robert’s place, it was opulent. Stone steps led down through lush, tropical landscaping to an octagonal open-air bar on the grounds of his bed and breakfast. Next to the bar was a small pool with inflatable chairs floating on the surface. Dennis sat with his customers, telling jokes and laughing. His open-collared white shirt, trim haircut and warm smile with perfect teeth spoke of a very different life than Robert’s.

Dennis joined our group and shared stories of his younger days, running a shuttle boat to exclusive Mustique Island when the only airport was here on Mayreau. He took Princess Margaret’s son David on a speedboat joy ride after the two were out of Margaret’s view, ignoring her admonishment to “be careful!” He once spent the night dancing with Raquel Welch at a party because her French husband wouldn’t, preferring to drink champagne on the terrace and smoke. He calls Mick Jagger a friend. Married and divorced twice, Dennis toasted his children with “a gin and tonic for my kids in England, and a beer for my kids in Germany!” and chased it with a glorious laugh. 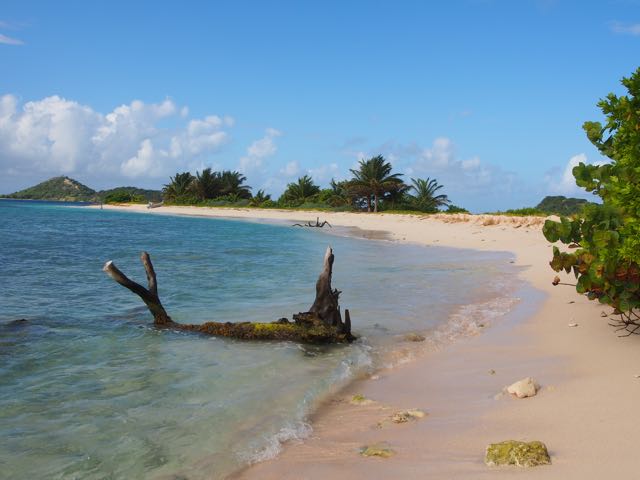 When we returned to the dock, the women were gone. The romantic couple still lurked in the shadows, talking quietly as we boarded our waiting tender. While we slept, the Diamant transported us to another island and in the morning, the owner of another dilapidated rum shack chatted with a friend as we walked on the beach.